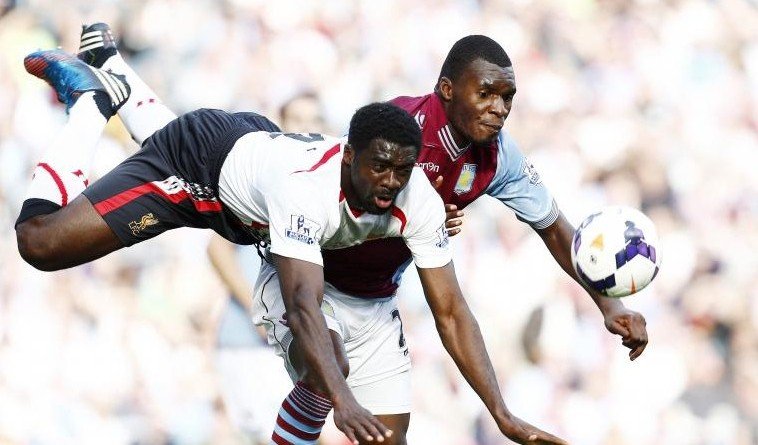 Analysis Feature
August 26, 2013October 30, 2013 Steven McMillan 2 Comments Analysis, Aston Villa, Brendan Rodgers, Christian Benteke, Kolo Toure, liverpool fc, Statistics, video
Daniel Sturridge may have been the one to get us on the scoresheet in Liverpool’s 1-0 victory at Villa Park yesterday, but it was the defence that played a key role in preserving that lead and keeping the Reds 100% start to the season alive.

Goalkeeper Simon Mignolet made two acrobatic saves to keep his team in front and Jose Enrique, Glen Johnson, Lucas and Daniel Agger all played their part in keeping the hosts quiet. When you play as a team, you win as a team, but as far as individual performances go, Kolo Toure sat head and shoulder above them all as the big Ivorian smothered Villa striker Christian Benteke and marshalled the backline with great effect; Kolo, it would seem, has what it takes to become a new Kop hero.

Video by the ever so helpful @MostarLFC

With Christian Benteke scoring 3 goals in Aston Villa’s opening 2 matches of the season, he was obviously going to be pinned as the danger man in an increasingly capable Villa side, but the big striker was restricted to a handful of chances as Brendan Rodgers wrapped a big Kolo Toure shaped blanket around the Belgian striker.

In his 90 minutes on the pitch, Liverpool’s Number Four took 57 touches of the ball and, as expected, spent most of his time in the middle of the park, occupying the space between the box and the center circle 40.30% of the time. To help counter the threat of Gabriel Agbonlahor, Kolo also spent some time drifting out to the right to help out Glen Johnson, but left the other side of the field in the capable hands of defensive partner Daniel Agger.

The big Ivorian won 75% of his duels and 66.7% of his aerial duels as he kept Benteke safely in his pocket. He would win the 1 tackle that he attempted — near the end of the first half against against Leandro Bacuna as the midfielder threatened — and effectively cleared the ball an impressive 11 times.

In the first half, the Reds dominated possession and a lot of that was down to accurate passing; by the end of the second half, that “death by football” mentality had all but dissipated as the hosts found themselves back in the match. Unlike a few of his teammates, Kolo didn’t stutter in this category and completed 96% of his passes — the best on the team — compared to the 83% completion rate for the entire side. The defender would only misplace two passes the entire match and was even accurate with the 1 long ball he attempted.

Stats courtesy of WhoScored and Squawka

The vacuum created in Liverpool’s back line when Jamie Carragher retired was obvious, but in capturing the Ivorian, Liverpool have added another strong presence that is paying dividends. Following the Reds win at Villa Park, Toure was quick to praise the club he joined just under two months ago. “They have given me a great chance to come here and play fantastic football with one of the best managers. I will enjoy every second of my time here and try to help the team.”

With the defender playing a key role in Liverpool’s first away win of the season, the travelling Kop made sure Kolo knew his contribution was appreciated. “I have been made to feel so welcome here,” Toure said. “To hear the Kop signing my name already was so nice.” There was little doubt that the big Ivorian was the Reds Man of the Match and if his last two displays are anything to go off of, there is more where that came from.

2 thoughts on “Kolo Toure vs. Aston Villa: Video and Stats”