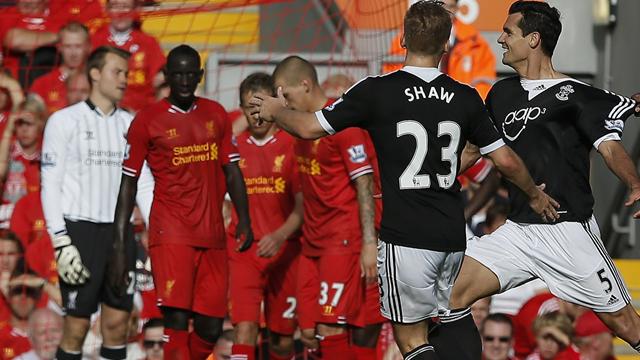 In the wake of such a demoralizing performance, it’s easy to forget that today was the first time that Liverpool tasted defeat in the Premier League since Southampton — again the culprits — turned us over 3-1 in last years reverse fixture at St. Mary’s all the way back in March. Liverpool had the chance to retain the top spot in the league if they could muster a win against the Saints, but it certainly wasn’t to be. Calling his team’s display “lethargic” and “technically short”, the Reds boss pulled no punches.

Despite the Reds turning out arguably their ugliest performance for some time, the numbers they posted yesterday aren’t far from what we saw them put up in our opening four matches when we made our best start to a Premier League season since Roy Evans was in the Anfield hotseat.

In our opening four matches, on average, Liverpool put 58% of their shots on target, held 50% of the possession, completed 81% of their passes and won 55% of their duels.

Yesterday was a mixed bag — we were 2% less accurate with our shots on net with only 56% of our shots finding the target. Our best showing so far this season actually came against Manchester United when 66% of our shots hit the net — in contrast, our poorest showing came against Aston Villa when we could only manage a pathetic 33%.

Though you never would have known it, we actually held 54% of the possession against Southampton, which is on average 4% better than our opening four games and our best showing so far. Previous to that, it was our win against Stoke City on the first day of the season that saw us hold 52% of the possession that held the crown. Unfortunately, when we had the ball, especially in the second half, we couldn’t do anything with it and could only muster a poor 78% pass completion rate compared to our previous 81% average. Only the win over Manchester United saw a worse rate with only 77% of our passes completed.

Liverpool boss Brendan Rodgers may rue our poor defending, but yesterday we won 58% of our duels — on par with our win at Villa Park — which in comparison to our season average of 55% was a small positive. Simon Mignolet did well to keep us in the match with a number of key saves, and although the 1 goal he conceded ended up being the winner, it was only the 3rd goal allowed in 5 matches.

Although Rodgers would explain that the injury to Glen Johnson and a concern regarding the fitness of Jose Enrique forced his –at the time — strange decision to start with four central defenders making up the Liverpool backline, it was hard for him to come to terms with the way we conceded possession in the buildup to what proved to be the winning goal. “To first lose possession, and then a goal, with so many defensive minded players on the pitch was criminal,” said Rodgers. The Reds have been criticized for their poor defending from set-pieces in the past and when former Lyon defender Dejan Lovren headed the visitors in front from a corner, it would do little to dismiss those accusations.

It may have been one slip out of many that saw Liverpool give up the lead, but it’s hard to overlook the effort the Saints put in yesterday and Southampton boss Mauricio Pochettino cut a sharp contrast to the downcast Rodgers. “The effort from the entire team was amazing,” said the Argentine, who continued, “We were much superior to Liverpool, especially in the second half.”

The second half hangover has been a point of contention for many Liverpool supporters; in each of our five opening matches, the Reds have both looked far worse for the wear and failed to score in the second period of play. Yesterday, the loss only magnified that and cast doubt on even the opening half where Brendan Rodgers men looked the more likely to score.

With a midweek meeting with Manchester United in the Capital One Cup on the cards and a trip to the Stadium of Light with bottom the barrel Sunderland coming up next weekend, there’s going to be little time to regroup. Despite seeing his undefeated streak come to an end, Brendan Rodgers is looking forward to his side recovering the kind of form that saw them hold the top spot in the league since the opening day. “We’ll just put it down as one of those days and now we need to go on another good run” said the boss.