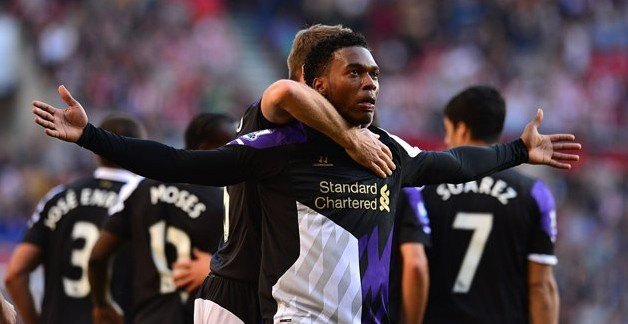 Match Reaction Premier League
September 29, 2013 Steven McMillan 1 Comment 3-1 wins, Brendan Rodgers, Daniel Sturridge, Emanuele Giaccherini, Kevin Ball, Kolo Toure, Lee Cattermole, liverpool fc, Luis Suarez, Sebastian Larsson, Simon Mignolet, Sunderland
We’ve missed Luis Suarez, haven’t we? The Uruguayan was a step or two off the pace on Wednesday night when the Reds crashed out of the League Cup to Manchester United, but he was quick to shake off the rust with goals on each side of the half supplementing Daniel Sturridge’s early strike to lift Liverpool into second place.

In contrast, Sunderland remain rooted to the bottom of the table after failing to build on Emanuele Giaccherini’s strike early in the second half. Caretaker manager Kevin Ball caused some nervy moments for the visitors as a number of familiar faces returned to the Black Cat’s lineup; despite a strong pressing game and some good spells of possession, the Reds were able to grind out a good result — and when all the points are added up in May, that’s what matters.

Brendan Rodgers stuck with an unchanged side from the one that lost to United midweek and decided to stay the course with three central midfielders making up the Reds backline — something Sunderland looked to exploit early on.

The early pressure was met with appreciation from the Sunderland faithful as Lee Cattermole — former captain and all around nuisance — repeatedly pressed the Liverpool midfield as they looked to slowly build from the back. With Jose Enrique and Jordan Henderson occupying the wingback position, as soon as the ball was won by the home side it would be quickly sprayed into the space behind either of them as Kevin Ball’s men looked to take advantage of that extra space. Former Juventus man Emanuele Giaccherini would create the Black Cats first real moment of danger when his low cross was cut out by Kolo Toure and not long after the Italian would lay the ball off for Ki Sung-Yeung, but the South Korean could only fire off target.

Referee Howard Webb would give away an odd freekick in a good area and Sebastian Larsson — another recall from the dark days of Di Canio — would smack the resulting freekick of the cross bar and Simon Mignolet would spend the next few moments counting his lucky stars as Jozy Altidore shot wide from the rebound. It looked like Sunderland were better for the goal when a poor back pass put Kolo Toure in an awkward position, but the veteran defender would keep his head to deny the Italian before the Nigerian played a key role in the opening goal.

We’re used to conceding from set-pieces — you don’t see us score from too many — but Daniel Sturridge would do just that with a little help from his shoulder after Kolo Toure flicked on Steven Gerrard’s well taken corner to put us in front just before the half hour mark. The striker, who currently sits top in the race for the Golden Boot, looked to the linesman to see if it would be called, but Webb allowed the goal to stand despite replays suggesting otherwise.

The Stadium of Light may have gone quiet after that, but the Black Cats weren’t giving up and they looked like good value for their money from set pieces with their former ‘keeper Simon Mignolet having some problems; he’d drop a Larsson effort and looked shaky on an Adam Johnson effort, but Luis Suarez would make the Belgian forget all about that only moments later.

Mignolet would show his distribution chops when he moved the ball quickly out and a lovely diagonal ball from Steven Gerrard would be expertly controlled by Daniel Sturridge. The goalscorer would turn provider as he showed Carlos Cuellar just enough of the ball to skip past him before Suarez — pointing exactly where he wanted the pass — got the ball dragged across the face of goal for him to tap-in.

Craig Gardener and Adam Johnson would have two quick chances in succession as the hosts looked to pull one back before the half, but it would take a Ki shot that took a deflection through the legs of Martin Skrtel early in the second half for the hosts to find the back of the net. Mignolet did well to get down and parry the South Korean’s drive, but Giancherini would be on hand to poke home as the Black Cats pulled within one; and they weren’t ready to stop there.

Craig Gardener would smack a bending shot, Jozy Altidore would once again be unlucky after a mixup between Mamadou Sakho and Jordan Henderson gave the American a good opportunity and Larsson would curl in another picture perfect free kick, but Mignolet would keep a cool head to deny his former teammates at each and every turn. As the Reds continued to absorb the pressure, the wingback system was looking good on the counter-attack as the visitors continued to raid the Sunderland half on the break and it was a Suarez — so effective at transitioning quickly from defense to attack — that would seal the points.

Simon Mignolet showed his distribution prowess once again when he found Suarez near the halfway line and the Uruguayan would effortless find Sturridge on the other flank with a crossfield pass. As Jordan Henderson and Suarez ran at the retreating backline, the England striker would show his composure to pick out Suarez once again for him to smash home and seal the points.

Three goals for the first time this season and our first goal in the second half made it a good day to be a Red, but the win didn’t come without it’s own concerns — ones that can be addressed another day. The win catapults us into second place with Tottenham’s inferior goal difference putting them behind us in the standings and poor Manchester United — who lost to West Brom yesterday — looking up at us all the way down from twelfth.

How about that for a win? Think we’re going to keep this momentum going or is the bubble going to burst in a spectacular manner? Let us know in the comments section or give us a shout on Facebook or Twitter.