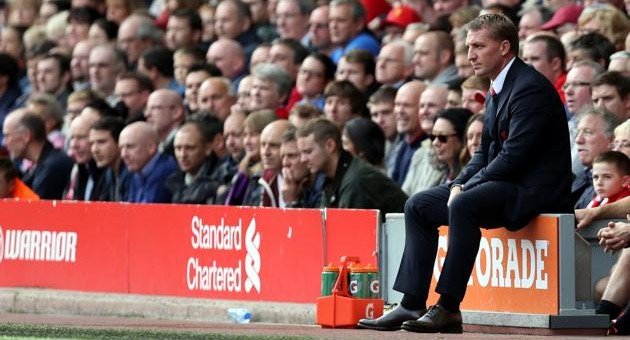 Liverpool may have gone top of the table — if only briefly — with a 3-1 win over Crystal Palace on Saturday, but Brendan Rodgers isn’t about to tell the side to rest on their laurels. “We haven’t hit anywhere near the level, performance-wise, that we want to,” said the Liverpool boss; and with that, it’s time to get back to work.

Like we’ve seen so many times this season, the Reds dominated the opening half with the kind of “death by football” performance the boss dreams about a night only to fall to pieces during the second half. Although the Eagles, who sit second bottom of the league, were lacking the talent to truly take advantage of our mistakes, Rodgers knows that a better side would have made us pay — especially with our new formation making us vulnerable on the flanks. “We put it at risk too much and that’s a part of the system with the players that we’ve lost, so it’s meant a shift to the structure and sometimes 3-5-2 is set up more as a counter attack.” Whether we were set-up to hit on the break or not, we were 3-0 up by halftime.

In our opening 6 Premier League matches, on average we held 50% of the possession; yesterday, although we looked shaky at times, by the time the full time whistle blew we had enjoyed 58% of the ball.

Although during the second half we ran into some serious complications trying to string together more than 2 passes, we ended the match with a 85% completion rate — with a 20m average pass length — compared to the 81% average we’ve held down since the start of the season. On Saturday we scored 3 from from only 8 chances created — 1 chance less than the average of 9 we’re used to — though we put more shots on net, with 7 of our 13 shots troubling the ‘keeper for an 82% success rate compared to the lowly 56% we’ve mustered since the season started.

With 1 goal conceded yesterday, we’ve now allowed just over 1/2 a goal per match in 7 matches with only 4 shots this season beating Simon Mignolet. The defense has also showed a bit of an improvement yesterday with the team winning 57% of their duels to betters our average of 54% since the season started.

Less than 20 minutes into proceedings, both Luis Suarez and Daniel Sturridge were on the scoresheet again and Steven Gerrard was quick to follow after Palace defender Dean Moxey’s foul on Raheem Sterling sent the Captain to the penalty spot. It’s hard to complain too much when you’ve got a pair of strikers that have nine goals between them in only seven games.

After beating Sunderland by the same scoreline last weekend, Rodgers was once again full of praise for his dynamic duo. “They give you a real thrust and a real edge. If we’re away from home and sometimes under the cosh, we counter attack because we’ve got that pace and people willing to join in. It can be a real threat.” Despite the impressive scoreline, Rodgers wants to do more than just win matches. “I felt today that in the final third of the pitch, it was hard to argue with the fact that we were outstanding – the movement, the combination play to arrive in there. But we’ve still got a lot of work to do behind that because the lack of control in the game was disappointing.”

With the players off to the far flung reaches of the Earth for World Cup qualifiers, the boss isn’t going to get much of a chance to work with too many of the starting eleven, but with matches against Newcastle and West Bromwhich Albion coming up before a trip to the Emirates stadium, we’ve got some time to improve — if not get it right — before our next real big test of the season.