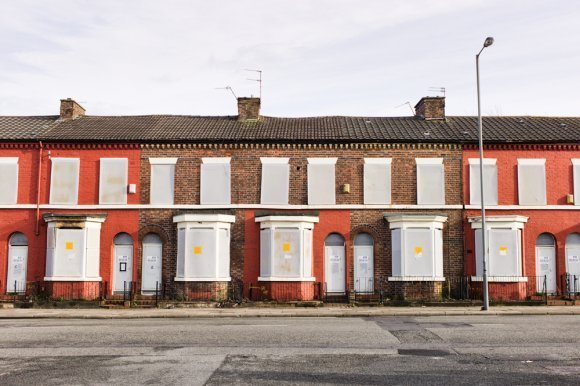 Editorial Feature
October 17, 2013October 17, 2013 Steven McMillan 3 Comments Anfield, Anfield Regeneration, FSG, Ian Ayre, Joe Anderson, Liverpool City Council, liverpool fc, stadium redevelopment
Any news coming out of the Anfield redevelopment front has been painful at best and today we crawled a little closer – through broken glass and cigarette butts of course – towards the ultimate goal of expanding the historic stadium to accommodate 60,000 people as well as revitalize the surrounding area with news that compulsory purchase orders could be issued if a swift resolution isn’t found.

The problem with compulsory purchase order is that – according to the Chris Bascombe in the Telegraph – is that the club could face a lengthy legal fight that could delay the submission of the new stadium plans by up to two years. There are six key houses that need to be purchased in order to move forward with the expansion; four of them are derelict and the remaining two are unoccupied by their owners. While these CPO’s have always been seen as a last resort, it’s come time for them to be seriously considered and Liverpool City Council will debate later this month, and decide early next year, whether to push them through.

Last weekend it was bats that were standing in the way of Liverpool moving forward with the expansion, but now we’re back to plain, old stubborn people. Those who reside in the Anfield area have overwhelmingly backed the project and the Liverpool mayor Joe Anderson has echoed that. “We have had overwhelming support from local residents and businesses for our plans and there is unarguable public interest in driving these proposals forward” said the mayor.

Steve Graves, writing in the Liverpool Echo, says that out of the 699 properties originally earmarked for demolition, 279 are either in the process of or are waiting to be demolished, 346 have already been purchased or have pending sales and the remainder are in talks to sell.

It’s been over 10 years since stadium proposals and regeneration of the Anfield area has been put on the table with numerous proposals – as well as a switch for the club to a brand new facility in Stanley Park – falling by the wayside, but Anderson seems determined to see this one through to the end. “The people of Anfield have been let down too often in the past. We will not let them down again.” The club, and their owners Fenway Sports Group, have showed the same kind of steely determination.

As soon as the club confirmed last year that expanding the stadium, rather than building a new one, was the preferred option, work began on driving the project forward. Despite the slow movement, word coming out of the Reds hierarchy remains positive and last month Ian Ayre confirmed that we were making steady progress. “Our ambition is to stay at Anfield, and we’re about 90% down the road in securing proprieties affected by redevelopment. I’m reasonably confident, the first phase will be closer to 60,000 capacity” said the Liverpool managing director.

The £260mil regeneration project is long overdue for both the club and the area. The Reds needing to compete on the financial field in order to compete on the football field has been a well worn turn of phrase for some time now and it’s one that everyone, including myself, is tired of using; especially when we’ve had this carrot dangled in front of us so many times in the past. Football aside, the revitalization of an area that has long been in decline is something massive for the city of Liverpool and the proposed shopping facilities, hotel, public space – as well as new homes – represents a push into the future; one that will benefit both the club and the city itself.