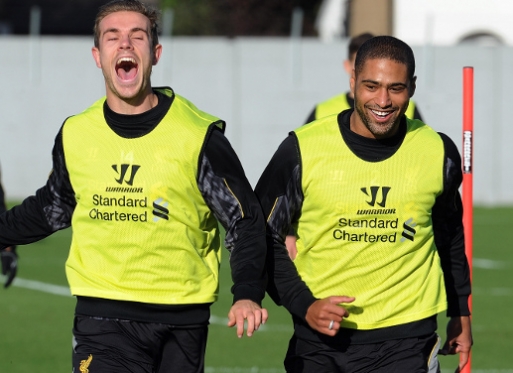 Match Preview Premier League
November 8, 2013November 8, 2013 Steven McMillan 0 Comments Arsenal, Brede Hangeland, Brendan Rodgers, Bryan Ruiz, Daniel Agger, Daniel Sturridge, Fulham, liverpool fc, Manchester United, Martin Jol, Match Preview, Philippe Coutinho, Sascha Riether, Steven Gerrard
Every couple weeks there seems to be an international break popping up to either halt our momentum or keep us from really regaining it. If last weekend’s reversal at the hands of Arsenal was a clear indication that Brendan Rodgers Liverpool side still stutter when it matters, then the visit of struggling Fulham this Saturday would of given us a shot at proving we know how to get the motor running again; too bad it’ll be back in the garage by Sunday morning.

Fixtures interruptions and car metaphors aside, the Reds have a shot at hanging onto third place and going into yet another international break in a Champions League spot – an enviable position that very few would have predicted at the beginning of the season. The Cottagers, on the other hand, are in a similar position, but it’s far from enviable.

Fulham have always been a reliable mid-to-lower table team. Given the right occasion, they’ve either punched well above their weight with remarkable cohesive performances or stumbled spectacularly – a prime example being both of their meetings with Brendan Rodgers side last season. In this fixture last year, the Reds ran out 4-0 winners with four different names on the score sheet, and in the return match at Craven Cottage, Daniel Sturridge set fire to the flames with his first hat-trick in a Liverpool shirt. It’s safe to say that the Lily Whites don’t want to remember either occasion – or most of the first half of this season.

With six losses from their opening ten matches, Martin Jol’s side is teetering not far from the relegation zone and the whispers around the water cooler have him next in line for the sack. If there ever was a bad time for the Dutchman to have to navigate another top-four side, this is it – and things are only going from bad to even worse. Fullback Sascha Riether will serve his first match of a three match ban for stamping on Manchester United starlet Adnan Januzaj last time out and will join Hugo Rodallega, who has a muscle injury, and Matthew Briggs, who is still recovering from a hernia operation, on the sidelines.

If there was a dim light to grasp at, Cottagers captain Brede Hangeland could return to the squad after a sciatic nerve problem kept him on the sidelines for their 3-1 defeat at the hands of United last weekend, but he’ll be a late fitness test along with striker Bryan Ruiz who has been hampered by a back injury. On the flip side of the coin, Brendan Rodgers should be welcoming back fullbacks Glen Johnson and Jose Enrique after the England man recovered from the jaw infection that kept him out of the Arsenal loss and the Spaniard nursed a knee problem for the last month.

While the inclusion of both fullbacks are no-brainers if they’re available, outside of Simon Mignolet starting between the sticks and Daniel Sturridge and Luis Suarez roaming around up front, every other spot in the squad is up for grabs. Philippe Coutinho, if fit enough to start, could occupy the Number 10 role – though it could also be filled by either Steven Gerrard, if he recovered from a hip problem picked up in the closing minutes of the Gunners loss, or Jordan Henderson, if neither the Captain or the Brazilian are available. Assuming that Rodgers sticks with the 3-5-2 formation we’ve seen over the last couple of weeks, the backline might remain unchanged, or Daniel Agger could warrant a recall to the squad with last weekend’s providing him the perfect outlet back into the squad.

The midfield pairing poses similar questions – does Lucas retain his place after his worst showing of the season? Will Rodgers take a gamble including Joe Allen in his place and if so, who partners him? Based on previous performances, there have been calls for Steven Gerrard to drop to the bench, but will Henderson, who just earned a recall to the England squad, have the confidence to keep it tight in the middle of the park? There are too many questions – though it is nice to finally have options available that don’t make you cringe at the thought of them taking the reigns against Fulham. Quality players lead to quality results.

Writing off the visitors is the easy thing to do, and though the Reds should be able to navigate this fixture without too much effort, this could very well be one of those times that the Cottagers pull it together and add a scalp to their collection. With Liverpool still reeling from the loss to Arsenal, and having capitulated at home to Southampton already this season, you can’t rule it out – though I wouldn’t put money on it. More misery for the Fulham faithful before the break is the more likely outcome.

Be sure to stop by before the match for any breaking news and line-ups and afterwards for a full review and other assorted goodies. In the meantime, if you’re so inclined, give us a like on Facebook and a follow on Twitter to keep in touch. We miss you sometimes…