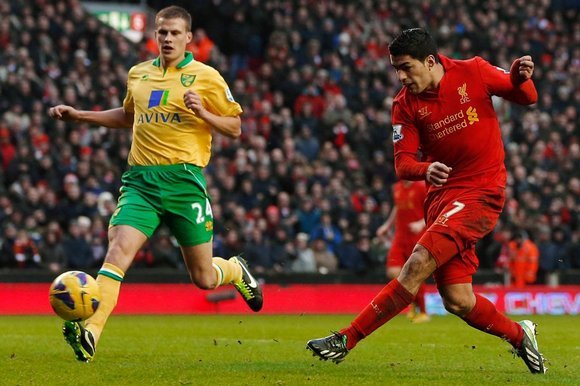 Match Preview Premier League
December 4, 2013December 4, 2013 Steven McMillan 0 Comments
A must win match against Norwich City? Sounds ludicrous, doesn’t it? Coming off an embarrassing 3-1 reversal to Hull City on Sunday, Liverpool go into their second match of a three match week having won only one in their last four league outings and needing three points against the Canaries to keep pace in the race for Champions League football.

Wednesday becomes all about responses – and not just for the points. To say that the Reds looked lethargic on Sunday would be a massive understatement; with crunch matches against Tottenham, Manchester City and Chelsea peeking over the horizon, Brendan Rodgers will do well to show the opposition that his side will be able to cope without the injured Daniel Sturridge. That, of course, starts with making an example of Norwich City tomorrow.

Chris Hughton’s side are coming off a good – but not entirely unexpected – win against Crystal Palace on Saturday, and though the momentum is technically behind them, history does not bode well for his side. The Reds are unbeaten in their last eight Premier League matches with Norwich and both meetings last season ended with Brendan Rodgers men putting five goals past the Canaries; Luis Suarez alone has seven goals, including a pair of hat-tricks, in his last three outings against the Norfolk side.

Former Celtic striker Gary Hooper was the difference on Saturday, scoring the only goal as Norwich City took full points against the Eagles and relived some of the pressure on their manager. “It is never comfortable viewing when you look at the league table and you are in a position you do not want to be in” said Hughton, whose side are only 4 points clear of the relegation zone. “However many places we have jumped [in the table] it is a nice feeling.” Getting the win on Saturday may prove important for the Canaries as you get the very distinct feeling that their visit to Merseyside – where they haven’t won since the old Kop was still standing — won’t be quite as fruitful.

While Brendan Rodgers will be looking to adapt to life without the services of Daniel Sturridge, in his pre-match press conference, the Reds boss confided that Philippe Coutinho – only fit enough for the bench against Hull City – will be “fine” for tomorrow’s match after training this week. Hughton, on the other hand, will be without wingers Anthony Pilkington and Robert Snodgrass as well as summer acquisition Ricky van Wolfswinkel who’s still a week or so away from making a return. This will come as good news to a side that’s conceded three goals for two games on the trot.

Liverpool’s woes at the back have been well documented, and with a revolving door line-up in heart of the defensive adding to the instability, Rodgers will be looking for a sign from the heavens come match day.

Martin Skrtel and Kolo Toure looked out of sorts against Hull on Sunday and if either retains their place in the side it would be a massive surprise. Daniel Agger could come back into the starting eleven alongside French international Mamadou Sakho who has been missing since the international break. The midfield, who many a armchair pundit has point to as the main culprit for all of Liverpool’s troubles, appears to pick itself with Steven Gerrard, Lucas and Jordan Henderson almost certain to start in one capacity or another unless the boss wants to try something drastic.

A return to three at the back as been debated by those with a predilection for tactics, and against a Norwich side without two of their most dangerous wide players, could serve Rodgers well should he choose to recall Iago Aspas to the side. The few appearances the Spanish striker has made this season have been out of position and it certainly showed; with Sturridge out until at least mid-January, the boss has thrown down the gauntlet to challenge those on the fringes to make an impact; Aspas could mark a return to from injury by putting in his first decent shift in a Red shirt on Wednesday.

The three at the back formation was originally devised to find space for both Sturridge and Suarez – who is nailed on to start on Wednesday – in the side and could be used to pile the pressure on the visitors in front of an expectant Anfield if Rodgers has enough faith in the Spaniard to hand him a starting berth.

Regardless of who is selected or how they line-up, nothing but three points will do.

December could make or break us; it’s been mooted that Liverpool’s league position is inflated given their so called “easy” fixture list thus far. A quick look at a few of the results this season – newly promoted Cardiff drawing with Manchester United, Newcastle beating both Chelsea and Tottenham, Aston Villa beating both Arsenal and Manchester City, as well as our losses to Hull City and Southampton — certainly re-enforces the notion that there’s no easy games in the top flight, but there are important ones. Wednesday’s, despite the relative lack of glitz and glamour surrounding it, is one of those matches. We have a point to prove before we go up against some flashier opposition…