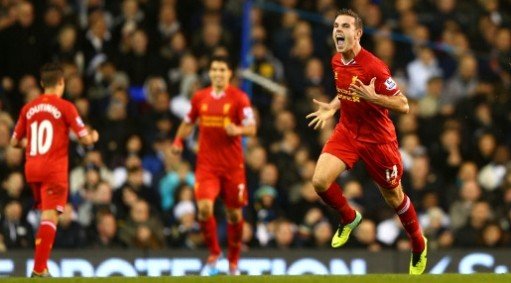 A double from stand-in captain Luis Suarez, along with strikes from Jordan Henderson, Jon Flanagan and Raheem Sterling, sees Liverpool jump back into the second place in the league and record their biggest ever win at White Hart Lane — a ground they haven’t been able to take full points at in their last seven visits. When you’ve just witnessed a blowout like that, more often than not you’d hear that the winning team wasn’t so good as the losing side was so bad; today, that would be nothing short of a barefaced lie.

With all due respect to Tottenham, they should have done, and were expected to do, far better. There was a real sense of expectation around the club that this would be their jumping-off point to get back into — if not the title race — then surely the competition for a top four spot. Despite some early pressure, this obviously was not the case.

Humiliating the likes of West Ham United and Norwich City is one thing — and again, I mean no unnecessary disrespect — but absolutely pantsing a Spurs side that shelled out a massive amount of money on new recruits over the summer is a completely different thing altogether. With the likes of Steven Gerrard, Daniel Sturridge and Jose Enrique watching from the sidelines, Reds fans everywhere were fearing the worst; but ended up getting the best.

Luis Suarez, in typical fashion, opened the scoring; the stand-in captain looked to play Jordan Henderson in, but with the England man cut off by a sliding Michael Dawson, the opportunity looked lost before his good work to harry the Spurs captain off the ball ensured the next chance fell to Suarez who had continued his run from midfield. From there, it was what you’d come to expect from the Uruguayan as he twisted and jinked away from Kyle Walker before slotting with aplomb past Hugo Lloris.

Nacer Chadli was presented with an almost immediate chance to equalize, but the Belgian headed over from a corner when he should have scored — a chance he’d be left to rue as the half ticked on. Midfield hardman Sandro, who had a late fitness test ahead of the match, was replaced by Lewis Holtby on the half hour, though the German would do little to compose an unsettled midfield as chances for the visitors to double their lead fell to Suarez, Coutinho and Glen Johnson — with Raheem Sterling heavily involved — before the youngsters scintillating pass ended with Henderson capitalizing on a Suarez rebound to score his first Premier League goal of the campaign.

The hosts almost pulled one back before the break when a backpass from Mamadou Sakho was misplayed by Simon Mignolet, but Roberto Soldado was adjudged to have fouled the Belgian before slotting home. Sakho came within mere millimeters of atoning for that mistake when he crashed a Raheem Sterling corner off the crossbar, but that miss hardly made a difference after Paulinho was shown a straight red-card when his boot connected with Suarez’s chest following a foolishly high challenge. This, it has to be said, was where it really fell apart.

Up to this point, you’d say that the hosts could have pulled it together and got back into it, but the third goal would come from an unlikely source as local lad Jon Flanagan — who continues to keep the far more experienced Aly Cissokho out of the side — volleyed home with his wrong foot from Suarez’s cross after the Uruguayan was played in by Henderson. The sheer delight on the fullbacks face said it all as the Liverpool born and bred defender scored his first goal for the club.

As if that wasn’t quite enough, thank you very much, there were more to come. Suarez scored his 17th goal this season with a picture perfect chip over Lloris after substitute Luis Alberto set him free and Sterling, who was only a hair short of Henderson for man of the match, rounded out the rout with a crisp finish after the Uruguayan sprung the hosts offside trap yet again. Absolutely unreal scenes at the Lane.

Goals always get the headlines, but there was a lot to be said for the way Liverpool defended today as well and the fact that we recorded our first clean sheet since September shouldn’t be lost in the mix. We’ll talk about that later, but Sakho and Skrtel barely put a foot wrong as Allen, Henderson and Lucas outplayed their far flashier counterparts — building from the back, defending in numbers and pressing the opposition from the front; death by football, Brendan Rodgers style.

That, without question, was our best awayday under the Liverpool boss and the belief that we’re going to win, and, almost as crucially, should be winning, is growing stronger with every positive result. Mentality can be everything, and though we saw flashes of it under Kenny Dalglish — and it should be pointed out that each of the goalscorers today were either bought or bloodied under his reign — it’s certainly being solidified under Rodgers.

Cardiff City at home next week before trips to Manchester City and Chelsea truly test our resolve. Three points today hardly guarantees a result on either of those travels, but it does give us the chance, and the right, to dream again.

We know you have something to say about that; let it go in the comments and give us a follow on Twitter and a like on Facebook to keep up with all the goodies to come.