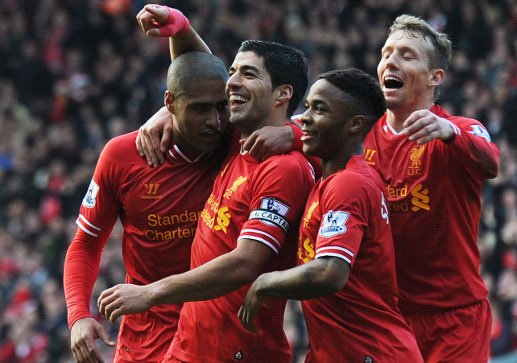 Match Reaction Premier League
December 21, 2013 Steven McMillan 8 Comments 3-1 wins, Brendan Rodgers, Cardiff City, Craig Noone, Jordan Henderson, Jordon Mutch, liverpool fc, Luis Suarez, Malky Mackay, Marshall, match reaction, premier league, race for Champions League, Raheem Sterling, Top of the Table
A routine home win for Liverpool over visiting Cardiff City sends the Reds top of the league in December for the first time since Rafa Benitez lead the title charge back in 2009. Where the Spaniard had an in form Fernando Torres to fire his side to the top, so does Brendan Rodgers in Luis Suarez and the Uruguayan continued his scintillating run of form with yet another outstanding display.

The easy narrative is that the Reds number seven was looking to repay the club for a hefty new contract extension, but that’s well off the mark — Suarez wants to win no matter what and today was just another reminder of that as he joined the pantheon of Premier League greats who’ve also scored 19 goals before Christmas Day.

It was all familiar stuff from the get-go; early pressure from the visitors through former Liverpool trainee Craig Noone and Peter Odemwingie gave the Reds backline a bother or two as Malky Mackay — still in charge of the visitors after last minute talks with the owner stayed his execution — set out with an attacking line-up. After weathering the initial storm, Brendan Rodgers men took in control in a way that’s become as effective as it is dominating: building from the back, patient on the ball and nothing short of deadly in the final third.

Chances fell to Raheem Sterling and Luis Suarez in the early going, but it took the Uruguayan only 25 minutes to find a way through a packed Bluebirds defence for his 18th goal of the campaign. A flowing move saw Joe Allen ease the ball on for Jordan Henderson and the midfielder, very much a creative force in the side since Steven Gerrard’s injury, chipped in a picture perfect ball into the area for Suarez to volley home.

The stand-in Liverpool captain was quick to acknowledge the quality of the delivery as the two celebrated the opener, and it would be Henderson that proved to be the catalyst for the second 20 minutes later. The Reds were denied by the woodwork through Philippe Coutinho’s smart shot and Jon Flanagan’s first time effort, but the third time would prove to be the charm as Henderson’s scything through ball found Suarez on the break.

With only Philippe Coutinho and Raheem Sterling for company, the Uruguayan looked on course for his 19th goal before he showed his unselfish side, squaring for Sterling — who looked a touch off-side — to finish past David Marshall. With an assist to his name, Suarez would go on to complete his brace when he snatched up a sneaky backheel from Henderson at the edge of the area before curling home a low shot from 18-yards.

Another Anfield rout looked to be on the cards, but the Reds dropped the tempo in the second half and the visitors looked to be a changed side after the break. Chances began to flow for the visitors and they were able to capitalize — how else? — through a set-piece when Jordon Mutch, their goalscorer last weekend away to West Bromwich Albion, was left unmarked to head home Peter Whittingham’s well worked free-kick.

Simon Mignolet had to be alert to keep out a looping header from Ben Turner as the center half got on the end of another in-swinging free-kick, but the Belgian was equal to the effort. An obvious penalty shout fell by the wayside when Martin Skrtel manhandled Steven Caulker as the two wrestled in the area, but in the end it would make little difference. As time began to peter out, Daniel Agger came on for Philippe Coutinho as Brendan Rodgers switched to three at the back in what could be a preview of our Boxing Day trip to Manchester City.

So, the Reds go top and have a chance to stay there come Christmas Day if Arsenal stutter against Chelsea on Monday. Three points against a very vocal Cardiff City side was a great warm-up for what’s the come; trips away to Manchester City and Chelsea are never easy, but if Brendan Rodgers can keep his side in this kind of form, they certainly won’t be the forgone conclusion that so many expected as little as a month ago.

How about that? Top of the table and having a laugh. Let us know what you think in the comments section below or hit us up on Facebook or Twitter. We’ll be back later in the day with more…