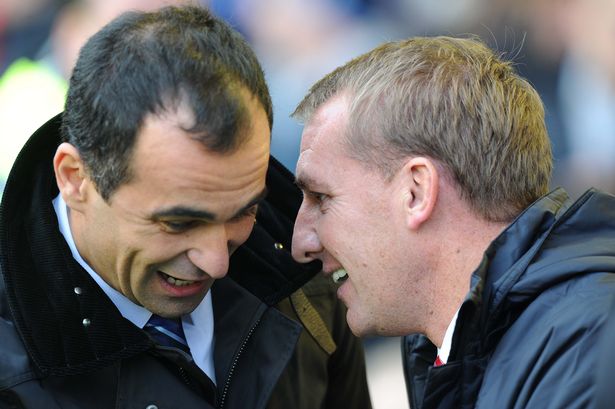 A single point separates the Reds in fourth from the Blues in sixth and a win tomorrow for either team could strike a decisive blow in the others Champions League ambitions. It’s been quite a few years since we’ve seen these two engaged in such a hotly contested race and there mere inches that separates us in the table has upped the ante considerably – this has always been one of the most important fixtures on the calendar, but now we’re back to playing for more than mere pride and bragging rights.

The 3-3 draw in November was nothing short of a classic, but without a definitive winner, the leftover expectation has surely been piled onto tomorrow’s meeting; and it’s quickly grown to mountainous proportions. It’s a short turnaround to Tuesday for both sides after each enjoyed progression in the FA Cup over the weekend with Liverpool sneaking past AFC Bournemouth and Everton downing Stevenage with a minimum of fuss.

The Reds will be thankful to reports no fresh injuries after goals from Victor Moses and Daniel Sturridge assured their progression to the fifth round, but the Blues didn’t fare as well with utility man Bryan Oviedo suffering a horrific double leg break as they ran out 4-0 winners to move on. The Costa Rican will certainly be sidelined for tomorrow, but Roberto Martinez will check on the fitness of defenders Phil Jagielka, Sylvain Distin, Antolin Alcaraz and Seamus Coleman, as well as midfielders Ross Barkley and Steven Pienaar, before setting his starting eleven. Unfortunately, his counterpart in Brendan Rodgers won’t have the same luxury.

The Northern Irishman named a strong team to face Championship side Bournemouth in the FA Cup more out of necessity than preference. For much of last week, the Reds boss was working with a mere 15 first team players after Glen Johnson and Lucas were added to the long-term casualty list after the 2-2 draw with Aston Villa at Anfield. Our most recent victims join a motley crew on the treatment table that also includes defenders Daniel Agger, Mamadou Sakho, Jose Enrique and Sebastian Coates. Holding midfielder Joe Allen will be a late fitness check after picking up with a problem in training before Saturday’s trip to Dean Court, but Jon Flanagan could make a return to the starting eleven after coming through a cameo appearance over the weekend unscathed.

At this point, the line-ups are anyone’s guess; regardless of who runs out at Anfield on Tuesday night, no amount of heat will be taken out of this always fiery fixture. The midfield battle between Gareth Barry and Steven Gerrard is sure to play a decisive role in the outcome, with service to either set of strikers absolutely critical. Luis Suarez and Daniel Sturridge have been in outstanding form and almost unstoppable in front of the Kop – if we can get them the ball, they know exactly what to do with it. Same goes for Romelu Lukaku at the other end of the pitch; Martin Skrtel and Kolo Toure will have their work cut out for them against the big Belgian, and if loan signing Lacina Traore finds his way onto the field, their problems will be more than doubled.

While nothing is assured when it comes to meetings between these two cross town rivals, there’s one thing that’s certain and that’s that this contest will go right down to the wire. Winning breeds the expectation that it will continue – not only in the fans, but in the team itself. When you’re no longer used to losing, you’re never resigned to the outcome. Both Rodgers and Martinez have done an excellent job of instilling a never say die attitude in their players, and it’s that kind of dogged persistence that should make this another classic.
–Steven

So, who’s gonna take the 222nd Merseyside Derby? Will Liverpool put another one over on their neighbours? Or is it high time that Everton get some love at Anfield? Let us know in the comments or take it to social media – we’re on both Twitter and Facebook.