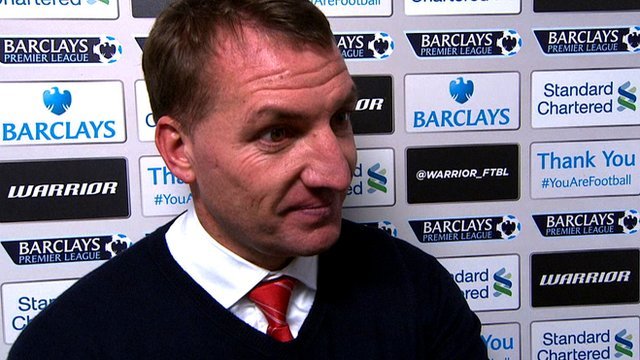 Editorial Feature
January 29, 2014January 29, 2014 Steven McMillan 1 Comment Brendan Rodgers, Daniel Sturridge, Everton, injuries, liverpool fc, Luis Suarez, post-match interview, race for Champions League, Roberto Martinez, Steven Gerrard, video
The pre-match jitters may have gotten the best of a lot of us, but in the days leading up to what would be the most important Merseyside Derby since the eighties, Reds boss Brendan Rodgers remained cool as a cucumber; well, on the outside at least.

Following the 2-2 draw with Aston Villa, the Liverpool boss insisted that his side would be better when Everton made the short trip across Stanley Park and the 4-0 scoreline proved him more than correct. “I know that feelings run high here on Merseyside for the derby games” said Rodgers following the final whistle. “It was a brilliant team performance.” Despite being plagued by injuries, the Reds pulled together and turned out a showing that few expected — that few, of course, didn’t include the boss.

Liverpool captain Steven Gerrard, who continued in the holding role, opened the scoring with a thumping header before Daniel Sturridge scored two goals in two minutes to send the hosts into the break with a commanding 3-0 win. Luis Suarez rounded out the scoring by slotting past Everton ‘keeper Tim Howard following a 50-yard dash early in the second half giving a number of Evertonians an excuse to file out of Anfield before the hour mark.

“It’s obviously really special because of the nature of the game – it was two teams that have been doing outstandingly well and doing the city proud throughout the course of the season” gushed Rodgers with in his post-match interview. “It was a combination of the players and the supporters – they were brilliant again tonight. I’m delighted for them because I know how special the derby games are here and how special they are for the supporters.

With a mere point separating the two sides going into this fixture, a win for either team would prove massive in the race for Champions League football. Although the visitors looked better placed to snatch their first win at Anfield since the turn of the century, it would be Rodgers that would record his first win in this all important fixture.

“We knew it was going to be a big match. I’m more delighted for the players and supporters. For me, it’s three points; I’ll be more delighted at the end of the season if we can arrive in the top four” enthused the Reds boss. “I’ll probably overanalyse the performance and see the areas we can improve on going forward.”

Talk of a title tilt aside, galvanizing their place in the top-four remained the most immediate priority for Rodgers and a well earned three points against a fellow rival brings with it not only the more obvious boost in the table, but a psychological edge that will do wonders for them in the coming weeks. Liverpool still have the likes of Manchester City, Arsenal and Chelsea left to play at Anfield, and after cruising against Everton, they’ll be well up for any side that comes knocking.

“All wins are important, but especially against your rivals” said Rodgers. “That’s four points clear of Everton now. We know there’s still a wee bit to go, but psychologically it was a big, big win for us and one that can reiterate the confidence and belief in the squad.”

The Reds boss said that if no one is brought in during the transfer window that it would galvanize the squad even more. Although Liverpool continue to search for reinforcements before the window slams shut on Friday, they hardly looked like it was a necessity during last nights win; we’ll see if that’s the case in the coming weeks.

One thought on “Brendan Rodgers on Everton Rout: Post Match Interview and Doing it for the Kop”