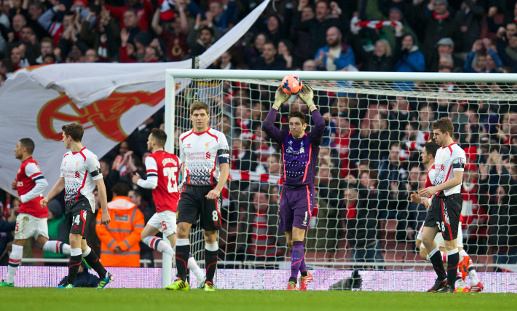 FA Cup Match Reaction
February 17, 2014February 17, 2014 Steven McMillan 4 Comments Alex Oxlade-Chamberlain, Arsenal, Arsene Wenger, Brad Jones, Brendan Rodgers, Daniel Sturridge, FA Cup, Howard Webb, liverpool fc, Luis Suarez, Lukas Fabianski, match reaction, Steven Gerrard
To be honest with you, I’m ok with the result; it’s never easy to see your team get knocked out of the FA Cup, but if you gave me a choice between beating Arsenal in the league or knocking them out of the fifth round, I’ll  take the points every single time.

They say that revenge is sweet, but this helping was tempered with just as much sugar as salt. In an end to end display, the hosts were certainly second best to a Liverpool side that continued to create, but surprisingly failed to capitalize. In a lot of ways, it’s hard to see how we could have done much better; the line about needing luck to win football games is usually trotted out by managers who have only straws to grasp at, but that intangible was the only thing missing from our game today — well, that and Howard Webb was the official.

A pair of opportunities in the opening exchanges for Daniel Sturridge surprisingly went begging as the Reds kicked off the meeting at the Emirates in much the same way they at Anfield. A precise Steven Gerrard through ball found the striker in space, but Arsenal ‘keeper Lukasz Fabianski was equal to his well struck effort. Luis Suarez was next in line to play provider for the 24-year old, dinking a ball into space for the him to run onto, and though he rounded the Polish shot stopper, he sent his shot wide of the post.

Although the Gunners failed to create much within the first ten minutes, they’d weathered the initial storm and were rewarded for their efforts not long effort when they took an unlikely lead. By this point last Saturday, they were down by a pair, but the North London side spurned their supporters to life when Gerrard blocked debutant Yaya Sanogo’s shot and it fell invitingly for Alex Oxlade-Chamberlain to finish low past Brad Jones.

Chances to equalize fell to Suarez, Sturridge and youngster Raheem Sterling before the break with the Uruguayan having the best opportunity of the three with an angled volley that Fabianski, at full stretch, did well to keep out. Despite having the bulk of the opportunities, Reds boss Brendan Rodgers saw his side go two goals down almost immediately after the restart when Oxlade-Chamberlain turned creator and, following a Suarez effort at the other end of the field, the youngster broke on the counter-attack along with Lukas Podolski. Quick as a flash, a neat one-two pass saw the German gobble up the 20-year olds cutback to finish past Jones.

Even at two down, the response from Liverpool was superb and Suarez would test Fabianski with yet another volley before Podolski went from hero to villain when he fouled the Uruguayan from behind as he dribbled into the area. Despite being dumb-struck that Howard Webb handed a penalty to not only Liverpool, but to Luis Suarez, Gerrard made no mistake from the spot, sending the Polish ‘keeper the wrong way with his assured spot-kick. Philippe Coutinho put Sturridge through on goal yet again, but it just wasn’t to be for the England man as the Arsenal’keeper got down low to deny him with a right-footed save before order was finally restored to the universe.

After seeing his free-kick cannon off the Gunners wall, Suarez was felled in the box yet again. Another clumsy tackle, this time  by Oxlade-Chamberlain, but with a different result. While the first penalty could have been considered a bit soft, this particular one was text-book, yet all Suarez got was a waggle of the finger from Webb as play continued. As the Reds searched for the equalizer, Coutinho could only send a shot of his own straight at Fabianski while Santi Cazorla, on for the close of the match, skied an effort at the other end when presented with a glorious opportunity to seal the deal.

The prerequisite frantic finish came within inches of bearing fruit when Gerrard’s free kick drew Fabianski out of his net to try to punch the ball clear, but with Daniel Agger beating the Pole to the skippers delivery, the Danish defender spurned the perfect opportunity to draw level when his header sailed wide of the net and sent Liverpool crashing out of the cup.

Honestly, again, this is an “oh, well” situation. Did Webb screw us? He most definitely did, but this one finishes differently had Sturridge finished even one of his chances in the opening exchanges — and you know what? Any other day he would have and we’d be lining up another chance to paste Everton in the quarter-finals. Intangibles, and Howard Webb aside, we were the better team and put in a performance to be proud of.

That was a bit hard to take, but what do you think? Blessing in disguise? Or a travesty of officiating? Let us know in the comments.

4 thoughts on “Liverpool (1) Arsenal (2): Gunners Get Revenge as Reds Drop Out of FA Cup”