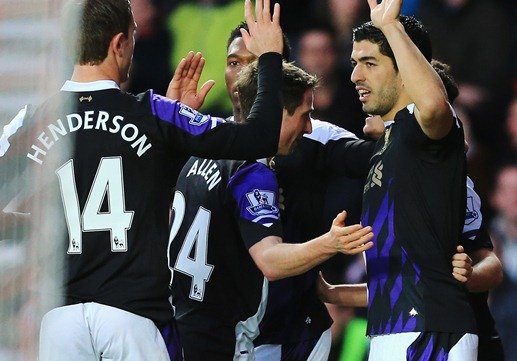 Luis Suarez ended his mini-drought to score on his 100th Premier League appearance after a lucky bounce saw the striker finish first time past Artur Boruc. The Saints had a number of chances to equalize, and in a second half-flurry they nearly did, but a timely substitution from Brendan Rodgers saw Raheem Sterling double their lead within 80-seconds of coming on. The hosts did little to press Liverpool after that, and when Jose Fonte fouled Suarez deep into injury time, Reds captain Steven Gerrard sealed the points from the penalty spot with an emphatic finish. Eleven years without a win at St. Marys’s? Reset that counter.

Three more points and the Reds keep rolling on; with Arsenal losing to Stoke City earlier in the day and Manchester City pre-occupied with their League Cup final meeting with Sunderland tomorrow, Liverpool slide into second place going into next week’s international break and open a seriously impressive nine-point gap over Tottenham Hotspur who meet Cardiff City tomorrow.

Rodgers side remain unbeaten in 2014 and rarely looked like losing this one despite some early pressure from the Saints. Argentine manager Mauricio Pochettino enjoyed taking full points at Anfield earlier in the campaign — the only time this season Southampton have beat a top four team — but he’d be shaking his head less than 20-minutes in when Suarez, trying to play a one-two with Daniel Sturridge, capitalized on Fonte’s poor touch to lash a first time shot past Boruc.

Adam Lallana, lively throughout, created a well worked chance for Jay Rodriguez in the minutes before Suarez’s opener and was unlucky to be denied by the post as the hosts looked for an immediate response. Some slick passing and good movement saw the host’s grip on the match tighten as the half wore on with Morgan Schneiderlin shooting just over after creating some space for himself and Simon Mignolet doing well to keep out Rodriguez’s well struck effort.

Southampton picked up where they left off after the break with Gaston Ramirez — on at the half for Steven Davis — the dangerman, but when Rodgers replaced the off the pace Philippe Coutinho with Raheem Sterling, he’d hit pay dirt when the winger scored with his first touch of the match. Suarez, whose movement is a thing of beauty, beat Croatian defender Dejan Lovren on the turn before setting the youngster up for his sixth league goal of the campaign.

The travelling Kop was in full voice today as the Uruguayan tried to turn creator again, this time slipping in Daniel Sturridge; the striker, looking to score in his ninth successive Premier League match, rounded Boruc but the angle was too tight for him to finish. More chances would fall to Henderson and Suarez and the Reds looked for the kill, but it would be Steven Gerrard that’d land the decisive blow from the penalty spot after Jose Fonte left a foot out to upend Suarez as he bamboozled his way into the box.

It was little less than what you’d expect from a side that’s scored 16 league goals in the month of February; three points at St. Mary’s means we leapfrog Arsenal — who have an inferior goal difference and keep the pressure up on league leaders Chelsea with a mere 10-matches left to play. After playing down our chances over and over again, is it time to start dreaming?

Let me check my watch…