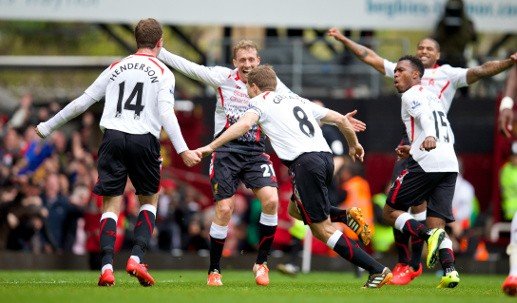 Match Reaction Premier League
April 7, 2014April 7, 2014 Steven McMillan 2 Comments 2-1 wins, Adrian, Andy Carroll, Brendan Rodgers, Guy Demel, James Tompkins, Jon Flanagan, liverpool fc, Lucas, Luis Suarez, premier league, race for Premier League title, Sam Allardyce, Simon Mignolet, Steven Gerrard, West Ham United
Those are the kind of matches that champions win; this teams newfound ability to grind out a win where we would have only been able to manage a draw before has been vital in the race for the title and we saw that again today — nine wins on the trot and three points sends us back to the summit of the Premier League.

Steven Gerrard put the visitors ahead from the penalty spot after West Ham defender James Tomkins handled in the area, but Guy Demel leveled the scores just before halftime after an apparent foul by Andy Carroll on Simon Mignolet was ignored by referee Anthony Taylor. The former Liverpool man crashed a header against the crossbar as Sam Allardyce’s side went looking for the go-ahead, but it would be the Merseysiders who’d walk on with the points after the Captain slotted home his second penalty of the match following Adrián’s upending of Jon Flanagan.

Sometimes you need luck to conspire with skill and we got exactly that — no more, no less. The Reds looked a bit sluggish in the opening exchanges in comparison to the all action, high tempo start in last weekend’s rout of Tottenham Hotspur. A curling free-kick from Luis Suarez came in the form of an opening salvo before the Uruguayan hit the crossbar with a audacious effort minutes later, but the Hammers proved a difficult side to break down, playing a perfect counterbalance in simplicity and basics to Liverpool’s more dynamic approach to the game.

Although the homeside dictated the ebb and flow of much of the first half, their good work was quickly undone as a clear handball from James Tomkins as Suarez attempted to cut inside of him sent Steven Gerrard to the penalty spot for the first time in the match. The Captain doesn’t miss too many and his well placed effort beat Adrian easily to put the Reds in the drivers seat.

They looked to be heading into the break with the advantage until a fracas in the visitors box saw Guy Demel tap home the equalizer. As Simon Mignolet jumped to collect Mark Noble’s corner, former Liverpool striker Andy Carroll put his hand in the Belgian’s face, causing him to drop the ball. Linesman Stuart Burt raised his flag for the foul, but referee Taylor inexplicably overturned his decision and allowed the goal to stand.

In seasons past, that could have very well been the deciding factor; the headline would have wrote itself and we’d have been left to rue our luck on the road once again, but that intangible that separates this team from former boss Rafa Benitez’s in the 2009 title chase reared it’s head once again. We expect to win and we aren’t about to be talked out of it.

Carroll crashed a header against the crossbar when he rose highest to meet the outstanding Mohamed Diame’s cross from the right wing as the second half kicked into high gear. Lucas, on for compatriot Philippe Coutinho at the break, was pivotal in Liverpool wrestling the control away from their hosts after the break and it was his neat pass for Jon Flanagan that saw the fullback win Liverpool’s second penalty on the day.

West Ham did quite well to defend in numbers and remain compact, but with the Brazilian’s excellent through-ball played directly into the path of the marauding defender, they looked like just another side that got carved open by the excellent passing game that Brendan Rodgers has drilled into his side. Upended by an onrushing Adrian, there was little choice but for Taylor to point to the spot where Gerrard would finish with aplomb once again.

Liverpool aren’t fans of one goal leads and chances for Suarez and Raheem Sterling came close to making proceedings a bit more comfortable, but in the end it didn’t matter as the visitors held on for the three points that’d send them back to the Premier League summit.

One game at a time, five more times; when Manchester City visit Anfield next weekend, it’s going to be a tense affair, but one that we’re well prepared for. If we can recapture the kind of attacking impetus that’s made Liverpool at Anfield the most explosive side in the Premier League and couple that with the resilience and desire we showed against the Hammers, we’re about to see something special.