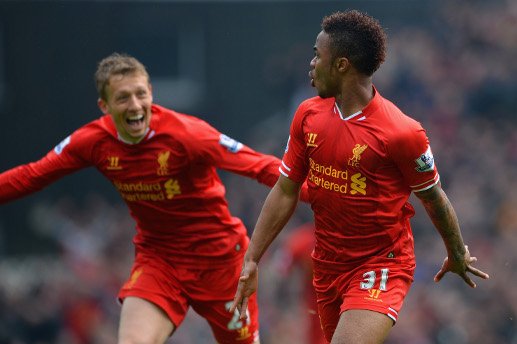 An error from Reds ‘keeper Simon Mignolet saw Gary Hooper pull one back for Norwich City before Robert Snodgrass’s header made things uncomfortable for the visitors. Canaries boss Neil Adams will feel aggrieved that his side — who are precariously perched just above the relegation zone — didn’t get more from the match, but his counterpart in Brendan Rodgers will feel nothing short of sweet relief at the cushion they’ve opened at the top of the table.

Three points today not only afforded the Reds some breathing room at the top of the table, but it also guaranteed a return to the Champions League for the side for the first time since 2009 — and in the opening ten minutes, they were playing like a team bound for glory on the continent.

We saw some fancy footwork from Raheem Sterling, who was nominated for PFA Young Player of the Year earlier in the week, in last weekend’s 3-2 win over Manchester City and it was the youngsters quick thinking that got his side off to a flying start when he outwitted Bradley Johnson before lashing home a deceivingly powerful 20-yard shot. Joe Allen, in for the suspended Jordan Henderson, saw his angled effort batted away by John Ruddy as the visitors probed for a second, but the Norwich ‘keeper wasn’t able to stop his old nemesis Luis Suarez from doubling the tally when he side-footed home Sterling’s picture perfect pass to claim his 30th goal of the campaign.

Despite the gap, Norwich City weren’t about to give up and the Reds backline had to be on alert on more than one occasion as the Canaries looked for a way back into the match. Allen played a key role in stunting a number of the hosts forays into the danger zone with his intelligent tackling and Martin Skrtel continued to show why he’s one of the first names on the team sheet with a clutch clearance after Mamadou Sakho was caught in possession.

The Frenchman nodded wide from a Philippe Coutinho corner and the Brazilian curled a shot off target as the Reds turned the screw, but it would be the hosts that struck next when, under pressure from Bradley Johnson, Simon Mignolet misjudged Steven Whittaker’s inviting cross and the ball fell kindly for Gary Hooper to tap home from eight yards.

Sterling quickly restored the Reds advantage when his shot took a massive deflection off of Johnson to loop over a stranded Ruddy. Despite the quick response, the Merseysiders were no longer enjoying the run of the park as Norwich pressed them hard. Martin Skrtel deflected a Nathan Redmond strike away with his head as Adams side hit a steady boil, and the soup as out of the pot when Robert Snodgrass, who had earlier seen his goalbound effort pushed around the post, pulled them back within one with a textbook header at the far post.

Substitute Ricky van Wolfswinkel came within inches of drawing his side level with a late header, but Mignolet atoned for his earlier mistake by getting down low to deny the Dutchman and ultimately seal the points for Brendan Rodgers side. The Reds are now unbeaten in eleven matches and sit with a five point advantage at the top of the Premier League table ahead of next Sunday’s meeting with Chelsea at Anfield.

After 24-years, the title is well and truly within touching distance — and, really, that’s all you need to say. No turn of phrase or attempt at flowery prose is going to amplify that fact any louder. We’re almost there and it means absolutely everything.