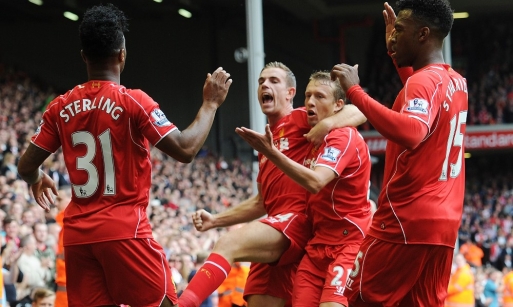 Fifty years ago today the great Bob Paisley started his Liverpool reign with a 2-1 win over Luton Town before going on to win all manners of things with the Reds.

While it’s not quite the same at all, Brendan Rodgers got his third season in the Anfield hot-seat under way earlier in the day with an scrappy, if not unconvincing, win over visiting Southampton by the exact same scoreline. It’s far too early to draw any parallels there, but there’ little doubt that the three time European Cup winning manager would have shown too much concern with the outcome. Three points is three points, now isn’t it?

The visitors looked uneasy in the opening exchanges and there was a comforting familiarity when Liverpool took the lead midway through the half. The ease at which Jordan Henderson threaded an inch perfect through ball — with his weaker foot, mind you — between a pair of Southampton defenders and right in line with the run of Raheem Sterling was a thing of beauty and left little to be done as the youngster slotted past débutante Fraser Forester to open the scoring.

With visions of the domineering performances of last season still fresh in the memory, you’d be forgiven if you’d assumed that the Reds would run away with the match from there on out, but things actually got a tighter as the Saint’s reorganized. Rodgers trademark “death by football” never materialized as the visitors hit back through James Ward-Prowse and Dusan Tadic as they searched for an equalizer. Morgan Schneiderlin came closest when he really tested Simon Mignolet with a rasping drive almost on the stroke of half-time, but the Belgian was on hand to tip it over the bar.

Despite losing a plethora of players — three of them to Liverpool — and their manager over the summer, rumours of the Saint’s demise has been extremely exaggerated and they proved that with gusto in the second half. As Liverpool took their foot off the gas, Ronald Koeman’s side stomped down on it and it was one of his summer signings in Tadic who was the architect, back-heeling the ball into the path of the on-rushing Nathaniel Clyne to smash home while Lucas was caught ball watching instead of tracking the run of the 23-year old.

The Brazilian made way for Joe Allen not long after as Rodgers tried to shake up proceedings, and though the Reds would begin to establish a foothold shortly after, Daniel Sturridge’s winner came very much against the run of play as the visitors continued to press. The England man was on hand to score the winner last season as Liverpool downed Stoke 1-0 in their first match of the season and he did just enough to do it again after an uncharacteristically direct bit of play saw him ease Sterling’s header over the line in what was his first real opportunity of the day.

It was more or less all Southampton from then on out as they laid siege to the Kop end. If Schneiderlin was disappointed to see his effort at the end of the first half saved by Mignolet, he’ll feel even more aggrieved now after the Belgian tipped another strong shot onto the crossbar and could only watch on as Shane Long — another signing making his bow for the Saints today — headed the follow-up wide of the mark with the goal gaping as the Reds saw out a nervy end to an even nervier match.

Although today was only further proof that Liverpool’s well documented defensive problems have yet to be solved, there’s certainly hope on the horizon. Lovren looked calm and composed in his first Premier League outing in the famous red shirt and the long awaited transfer of fullback Alberto Moreno has finally been completed. Last year it took a little while for the Reds to really get going with razor thin margins a feature of their opening three fixtures, but there’s no point complaining about a win this early in the season, is there?

When the points are tallied up in May, the three we earned today will certainly count, but if Rodgers and company want to finish the season one better than they did the last, they’re going to have to get this train rolling at top speed post haste. We’ve got some tricky away matches just around the corner and luck only lasts for so long…