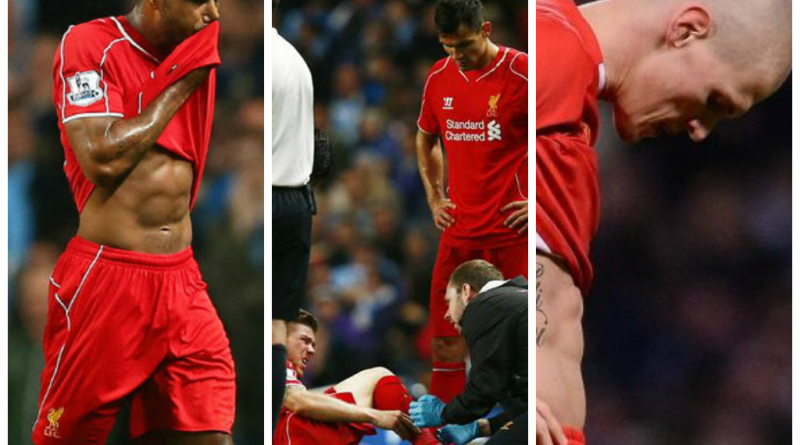 Liverpool began to fall to pieces in the closing stages of their 3-1 loss to Manchester City on Monday night with both fullbacks and a central defender picking up knocks and leaving Reds fans everywhere with a case of the nerves ahead of Sunday’s trip to Tottenham Hotspur.

Glen Johnson, who left the field limping after Liverpool boss Brendan Rodgers had already used all of his substitutions, appeared to pick up a thigh injury that kept him from seeing out the remainder of the match. “Glen looks like he’s pulled his thigh. We were gathering a bit of momentum there when he had to come off, so obviously in the last 10 minutes when we were down to 10 men it was difficult for us” said the Reds manager after the game. “But he’s done his thigh and we’ll assess that later on tomorrow.”

With loanee Javier Manquillo waiting in the wings, the injury to Johnson might not be quite as big of a blow as it would have been in the past, but news to new signing Alberto Moreno could also be laid up is troubling indeed.  “Moreno – his foot came off the grass onto the astro turf so he twisted his ankle” continued the Northern Irishman. “There’s a bit of swelling now but we’ll see how it is in the morning.” The 22-year old left the stadium with his foot heavily bandaged and could miss out on Liverpool’s trip to London this weekend.

So, apparently, could Martin Skrtel. The Slovakian defender was caught late by City midfielder Yaya Toure and will also be looked at ahead of Sunday’s showdown at White Hart Lane. The experienced defender has been a mainstay in the Reds backline since earning his place in the starting eleven back last year, but Mamadou Sakho could be given a shot beside Southampton transplant Dejan Lovren if he’s not passed fit.