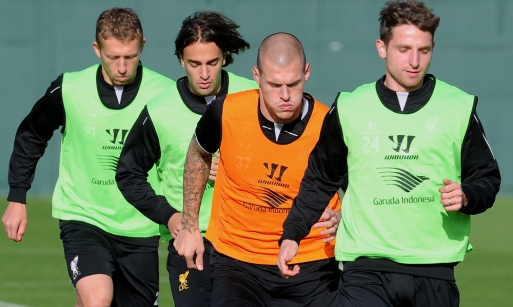 It was foolish of me to think I could just sit down and pound out a quick match preview for tomorrow’s meeting with Queens Park Rangers wasn’t it? The entire post was outlined and I even had a witty closing line to cap the whole thing off — then I saw the news that Daniel Sturridge was injured again.

The tone of this just drastically changed. I’ll re-iterate the fact before we go any further that one man does not a team make, but there’s no denying the mental lift that comes along with having arguably your most potent attacking threat on the verge of a return from a long injury lay-off. Likewise, there’s no denying the inevitable plunge in morale when that same player, already out for six weeks after being injured with the national team, faces a setback on the eve of the match.

While I’m sure they wish him no specific harm, how great must this be for the Hoops? It’s not like they don’t have injury problems of their own with both Jordon Mutch and Joey Barton set to miss out with their own respective hamstring problems, but it’s become apparent that Liverpool with Sturridge as the focal point of their attack is a drastically different beast to one that is missing the talismanic 25-year old. The eternal optimist in me knows that Liverpool will find their stride sooner rather than later, but it’s the “later” part that is doing the damage.

There’s little doubt that a fit Sturridge would help paper over more than his fair share of the cracks. The new boys need time to gel in the side; it’s an age-old explanation and one that, thankfully, repetition doesn’t make any less valid. We’re starting to see the team pull together in a more cohesive fashion already, but there’s no question that a goal or two — which, let’s face it, he’s going to score — from the 25-year old here and there would flip the script. Turn the loss to Aston Villa into a draw and the draw with Everton into a win and where does that leave us?

Of course, these trivialities must smack a bit of footballing bourgeois to bottom of the barrel Rangers. There’s no denying that their first year back in the Premier League hasn’t been easy, they are the shortest odds for relegation along with Burnley by a long shot in fact, but now that they’ve spent much of the campaign looking up the table at the likes of Leicester City, cause for concern isn’t just starting to brew, it’s threatening to boil over. The news that Niko Kranjcar is set to feature despite breaking a toe comes as welcome news to QPR boss Harry Redknapp, but his continual assertions that he’s not under pressure, or going to walk away from Loftus Road, are starting to sound a touch hollow.

Snatching a scalp tomorrow would change all that though, and to be fair, it’s not even remotely out of the realm of being a real possibility. There’s no way to spin this Hoops team as a real tangible goal threat, much like there’s no way to spin Liverpool as a bastion of defensive stability. The fact of the matter remains that the Reds remain highly vulnerable at the back, and if QPR can find a way to exploit that tomorrow, then we could have a match on our hands.