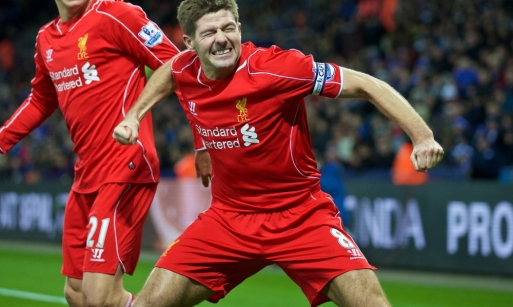 I’ve said it many times before and you’ll excuse me if I say it again: a win is a win is a win. Liverpool record their first victory on the road since late October by downing bottom of the barrel Leicester City 3-1 in a performance highly reminiscent of their win at the weekend — far from their scintillating best, but nowhere near their embarrassing worst.

Simon Mignolet did little to assure the Reds faithful of his competence between the sticks, following up a glaring error with an own goal as the Foxes took a surprise first half lead, but that tidbit of momentum lasted a mere four minutes when Adam Lallana played poacher to level the scores. Steven Gerrard, returning to the starting eleven since riding the pine against Stoke City on Saturday, gave his side the go-ahead with a composed finish before Jordan Henderson rounded things out against ten-men after Wes Morgan was shown a straight red.

To be fair, the Reds could have quite easily been two-nil down within the first 20-minutes of play. Mignolet has come in for a heap of criticism following a series of high profile blunders, and with his head switched off, he nearly made another during the opening exchanges when his lackadaisical pass across the edge of the area found Esteban Cambiasso instead of Javier Manquillo.

Thankfully, the veteran midfielder skewed his shot wide, but the Belgian wouldn’t be quite as lucky less than a minute later, after initially making a good stop to deny Jamie Vardy’s attempt, the follow-up squeaked past him at the near post through a combination of Leonardo Ulloa’s effort, the woodwork and his own back after the ‘keeper had recovered his position.

Lucky as the hosts may have been to get on the score-sheet, they found that their good fortune had evaporated less than five minutes later when Brendan Rodger’s side pulled level. The Northern Irishman brought Lallana back into the starting eleven in place of Philippe Coutinho, and his quick reaction was paramount in pulling the sides level when, after Lucas swung a poor free-kick back into the area, Rickie Lambert and Morgan wrestled for possession. A poor headed clearance from the defender saw the ball fall to the feet of the former Southampton captain and quicker than you could say “level peggy” his half-volley had hit the back the net and he’d wheeled off to celebrate.

We may have been back on terms by the time the half-time whistle was blown, but we hardly looked like taking the lead as Leicester dominated the start of the second — that is, until another poor clearance from Nigel Pearson’s defence put the go-ahead on a silver platter.

Raheem Sterling, who was continually frustrated on the night through a combination of Lee Mason’s officiating and Ritchie De Laet’s physical defending, found some joy down the left before whipping in a low cross into the area. Morgan, who would complete a hat-trick of errors in due time, once again failed to clear, only toe-poking the ball as far as Gerrard, who was waiting about 10-yards out, and that story only ends one way.

Despite going behind, the Foxes continued to surge forward, but their cause was made that much harder when Lambert, having got the best of the Leicester captain, was hauled to the ground to deny him a clear goal-scoring chance. With no hesitation or prompting, the referee produced a straight red card and Morgan’s already torrid evening was capped off with with his dismissal.

Even down to 10-men, the hosts looked the more likely to score with pressure continually building on Rodgers backline. Alberto Moreno, introduced at the break for compatriot Manquillo, looked a touch off the pace as the struggled on the left, but seven minutes from time the Reds would add some insurance when Kasper Schmeichel faileed to hold Gerrard’s cross. With the ball spilled into the path of Sterling, the winger looked to have carried the ball too-wide to score himself, but he created something instead with a backheeled pass into the area for Jordan Henderson to sweep home.

Just like that, three losses on the hop turns into two wins on the bounce. While the scoreline may suggest a decent performance, much like the win over Stoke City, it was a victory that was ground out rather than carved with finesse — and that’s OK by me. We’re out of the wrong half of the table and moving on up ahead of Saturday’s meeting with Sunderland and the all important visit of FC Basel in the Champions League midweek.

Again, it’s not a corner turned or a page flipped; I said it on Saturday and I’ll repeat it here. We still have a lot of work to do and climbing back up the table isn’t going to be easy — especially at this stage of the season, but if we can pull through our next two matches, then we won’t just have something to smile about, but we’ll have a real springboard for a real revival.