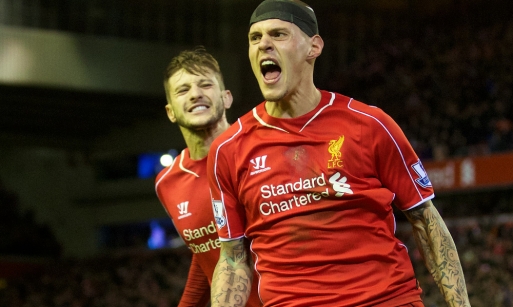 Deep down every Kopite knew that the 5-1 pasting that we handed Arsenal in this fixture last season just wasn’t on, but by the way Liverpool started, you never would have thought it. That is, until you saw the way they ended.

Philippe Coutinho looked like he’d handed the Reds the lead on the stroke of half-time when his low shot was drilled into the bottom corner of the net, but Mathieu Debuchy somehow out-jumped Martin Skrtel to nod home with practically the final touch of the opening period. Olivier Giroud put the Gunners ahead just after the hour mark following some comical defending, but Arsene Wenger’s side never looked like hanging on to the lead even after the hosts went down to ten men and it would be Skrtel, who bagged a pair of headed goals in last season’s thrashing, that punished Arsenal yet again.

Punishing the visitors looked to be the order of the day right from the get go. Liverpool, and in particular manager Brendan Rodgers, have been heavily criticized as of late, but there are few pundits that could argue with their first half display. Rarely does a team dominate possession against Wenger’s side and it’s certainly unheard of them for them to be bossed around the park, yet that’s exactly what the Reds did in the opening exchanges.

It’s one thing to make a strong start and it’s an entirely other to keep it up for a sustained period, but with Anfield behind them, Liverpool were far more patient and composed on the ball than we’ve seen in a long time and it paid off — unfortunately though, it wasn’t in goals. Lazar Markovic, retained in the wing-back role he impressed in during the midweek League Cup win over AFC Bournemouth, was the danger-man for the Reds, constantly overlapping and getting in behind Arsenal defender Calum Chambers. Quick legs from Wojciech Szczesny were the only thing that kept the Serbian off of the score-sheet when he tried to slip the ball between the ‘keepers sprawling legs after he found himself clean through on goal.

Although a number of chances went begging, the quality of movement and passing behind them shows a Liverpool side that’s starting to find its groove again — and when Coutinho found the net to break the deadlock, if only for a moment, it felt like it was OK to believe again. Both the Brazilian and Adam Lallana were providing sparks up top alongside European Golden Boy Raheem Sterling, but when the Reds number 10 jinked himself a bit of space as Per Mertersacker retreated in his wake, the 22-year old showed that extra bit of ingenuity as his shot flew unimpeded through the German’s legs before nestling in the back of the net.

A lead going into the break was nothing more than they deserved, though it came with little surprise when — after failing to properly clear a free-kick — Mathieu Flamini’s speculative header back into the box saw Debuchy rise higher than Skrtel to head home past a befuddled Brad Jones.

Despite opening the second half with the same kind of fire as the first, just after the hour the visitors drew level through Giroud. The Frenchman got on the end of Santi Cazorla’s cross after playing the Spaniard into the box with a cheeky pass to help the Gunner’s to an undeserved lead as memories of the loss at Old Trafford last week dredged themselves up. Liverpool creating everything, but failing to score, the opposition creating very little and taking advantage each and every time; typical.

Thankfully, Arsenal isn’t all that impressive at the back either. It was apparent from the start that Rodgers wasn’t about to accept another defeat, and with the Reds now chasing the match, the proverbial kitchen sink was thrown at the visitors as Fabio Borini and Rickie Lambert, were thrust into the fray — and still, we got no joy in front of the net. Coutinho scuffed more chances than most sides manage over 90-minutes, Steven Gerrard saw a long distance effort collected, Lucas fired over from the edge of the area and Borini was twice denied by Szczesny before being dismissed for his second bookable offence.

If the Italian was looking to tarnish his name further with the Liverpool boss, he likely succeeded, but even reduced to ten men, the hosts never looked like giving up as the Kop bayed for what was rightfully theirs — something that Skrtel, bandaged from an accidental clash with Giroud early in the second half, was only happy enough to provide when he smashed a trademark header home in the 97th minute to salvage something from nothing.

Considering the way we played, to say that two points were lost rather than one was gained wouldn’t be entirely inaccurate, but it strays a little too far away from the bigger picture; a draw with Arsenal is never a result to be ashamed of no matter how you slice it. The Gunners, having come off a pair of big victories against Galatasaray in the Champions League and Newcastle United domestically were always going to score goals against a defence as fragile as ours. That we were able to respond in kind, and miss so many along the way, shows a massive leap from the attacking debacles we saw against Crystal Palace and Sunderland mere weeks ago.

At the end of the day, one point doesn’t do us much good — that I’ll concede, but when is seeing your side turn a loss into a draw not a positive? Cheer up you gits…