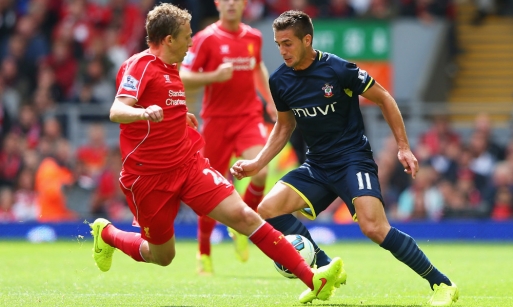 Liverpool midfielder Lucas continues to be linked with a move away from the club with a lack of playing time often listed as the reason for his wandering eyes. Although the Brazilian has been making more appearances as of late, that hasn’t stopped the rumour mill from chugging along — and now, new Inter Milan boss Roberto Mancini has added fuel to the already well stoked fire.

A controversial reunion with struggling Reds striker Mario Balotelli, who the Italian manager had under his wing during his time at Manchester City, has been touted ever since he took charge of the Nerazzurri for a second spell, but it looks like he’s got his eye on a different Liverpool player altogether with the defensive midfielder high up on his January wishlist.

“Inter have got to look to improve on many fronts and if we are lucky enough to get the new players we want for the roles we are currently lacking in, then that would be much better,” said Mancini when asked about his plans for the winter window, before going on to confirm that the club has been looking at bringing Lucas to the San Siro. “[Lucas Leiva] is a great player, but he belongs to Liverpool and it’s going to be hard to get him. He would be useful, though, as he could help our younger players grow.”

The Brazilian has found his chances limited at Anfield this season, appearing in only seven of Liverpool’s 17 Premier League matches so far this season — and of those, he’s only played the whole 90-minutes on three occasions. Although he’s been continually linked with a move to Italian Super Cup winners Napoli, currently managed by former boss Rafa Benitez, the Partenopei look to be not only gun-shy, but strapped for cash as well. We’ll have to see if Reds boss Brendan Rodgers new penchant for playing 3-4-3, a formation that relies heavily on a player with Lucas’s qualities, breathes new life into his Merseyside career…