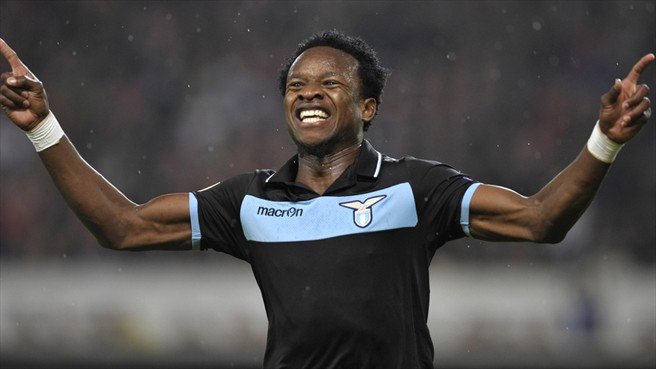 Lazio midfielder Ogenyi Onazi may have signed a new 2-year deal with the Serie A outfit back in September, but that hasn’t stopped the Nigerian international from continuing his public courting of Liverpool with the Nigerian confirming, once again, his interest in making a move to Anfield.

An agreement looked to be on the the cards last January, but with the two sides unable to agree to personal terms, it broke down before it could be completed. The 21-year old saw out the remainder of the season with the Roman team before impressing at the World Cup with the Super Eagles — one of the key factors in his improved deal with Lazio. “I give God the glory and special thanks to everyone involved in sorting out this new deal,” he said after putting pen to paper. “It’s important to know that your future at the club is sorted; I’ve always insisted that I love it here and I’m delighted to stay.”

Apparently, things have changed. Although he looks to be in manager Stefano Pioli’s plans, Onazi has only featured in half of the Biancocelesti’s domestic matches, completing the 90-minutes on only three occasions. With fellow Italian side Inter Milan keeping tabs on Liverpool defensive midfielder Lucas, Reds boss Brendan Rodgers could be tempted to re-ignite his sides interest in the Nigerian if the Nerazzurri decide to make a move — something that the 21-year old would welcome.

”If Liverpool presented itself to me I could not say no” he told media outlet SuperSport in a recent interview. “We are talking about a big club and I have always wanted to play in England. The transfer window has yet to open and their will be plenty of offers from all over the world but at the moment I am in a complicated situation.”