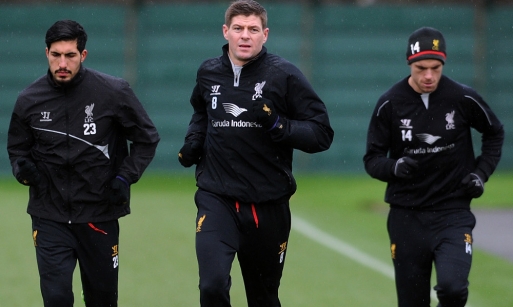 When people talk about the magic of the FA Cup, it has nothing to do with two top-flight clubs battling it out at Wembley for the trophy — it’s ties like this where the true appeal of the cup lies.

Liverpool may have faced off for that famous piece of silverware under the circumstances described above at the end of the 80’s with Wimbledon, but that was a vastly different side than it is now — when you consider the team we knew as the Crazy Gang would, under extremely controversial circumstances, relocate to another town and change their name to MK Dons not even 20-years later, the amazing feat of the real Wimbledon’s rebirth oozes magic and sentiment into this showdown whether you care to admit it or not.

When you couple that with Reds captain Steven Gerrard’s decision to announce that he’ll be leaving Anfield for a Major League Soccer side at the end of the season, the romance only grows. The mercurial midfielder was still 10-years off from from making his debut for his hometown club when the Don’s shocked a star-studded Liverpool side to claim the only major trophy of the clubs original incarnation, but the Anfield outfit isn’t likely to let that particular piece of history bother them when they run out at Kingsmeadow’s on Monday.

To be fair, most of the Liverpool first team wouldn’t know the end of the 80’s if it smacked them up-side the head and that’ll be just fine by boss Brendan Rodgers. The Northern Irishman is expected to chop and change the side as they hit the end of a grueling run of fixtures that started with the 2-2 draw with Arsenal four days before Christmas.

The Reds have played four matches since then and their expected to bring in a number of squad and fringe players to dispatch their League Two opponents. Dejan Lovren, Javier Manquillo, Lazar Markovic and even Mario Balotelli, who was left out of the squad completely for the 2-2 draw with Leicester City, could very well be drafted back into the squad as Rodgers keeps one eye firmly on the trip to Sunderland next Saturday.

Wimbledon, on the other hand, will likely throw everything — including a whole number of kitchen sinks — at their visitors. On the back of their recent run of matches, they’ll also be confident that the amount of plumbing their prepared to toss can secure them a slot in the next round of the competition. Although they’ve struggled at points this season, The Dons have won four of their last five outings, dispatching Exeter 4-1 just before the New Year to give them a much needed boost going into the meeting with the Reds.

League Two top scorer Matt Tubbs will be looking to keep his excellent run of form going, cult hero Adebayo Akinfenwa won’t be pulling any punches and, in the build-up to tomorrow’s match, Wimbledon boss Neal Ardley confirmed that vice-captain Barry Fuller will be available after tweaking his hamstring at the end of last week.

Still, no matter who lines-up and and what the score is, it’s going to be a massive occasion that won’t be forgotten anytime soon for Don’s supporters everywhere. From actually extinction to an FA Cup meeting with one of the most storied clubs in the English game? That’s what magic is made of.

One thought on “AFC Wimbledon FA Cup Preview: There’s Magic Here Whether You Want it or Not”