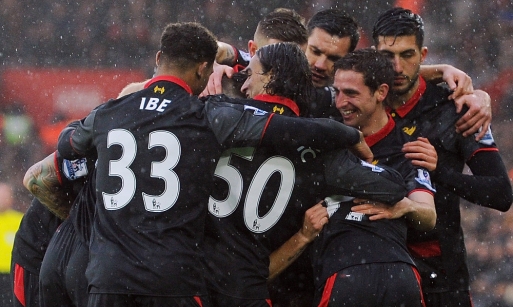 We’ve gone from being nine points off the Champions League places during the festive period to being a mere two at the end of February. There’s no games in hand to pad those numbers and no creative number crunching either — that’s cold, hard mathematics.

It was contentious at the worst of times and nerve racking at the best, but a first half wonder-goal from Philippe Coutinho and a predatory strike from Raheem Sterling were enough to give Liverpool victory over Southampton earlier today in a match that was marred by controversy. The hosts had no less than three penalty shouts waved away in the first half by referee Kevin Friend, and though they may feel aggrieved not to see at least one go their way, in the end they failed to create too much in the way of real danger from open play despite enjoying the majority of the ball on a rain soaked evening on the South coast.

By the time Coutinho opened the scoring, working a pocket of space in the third minute of play before unleashing a powerful, dipping shot that cannoned in off the underside of the crossbar, the Saints had already seen one appeal turned away when Filip Djuricic went down far too easily under the challenge of Emre Can as the Serbian tried to run clear on net.

The 23-year old saw his second penalty shout come in short shrift and fall on deaf ears when Joe Allen made sloppy work of a clean-up job just inside the area, but Eljero Elia wouldn’t be able to capitalize in the confusion that followed as Simon Mignolet helped the Reds hang on to their lead. Liverpool saw an appeal of their own turned away by the man in black when Saints defender Jose Fonte scythed down Raheem Sterling in the area. Despite the all action outing, the first half was more notable for the persistent booing of ex-South coast heroes Dejan Lovren — standing in for the injured Mamadou Sakho — and Adam Lallana than it was for the creation of clear cut chances, though there’d be more controversy to come.

Before the half-time whistle Elia was handed a glorious opportunity to atone for his previous soft attempt on goal when a ball over the top from Nathaniel Clyne sent the Dutchman racing towards the Reds net, but he was unable to lift his shot up and over Mignolet as the Belgian raced to the edge of the area to bat it away.

Replays suggested that he was outside the box when he handled the ball, but the Liverpool ‘keeper remained on the pitch and was on hand to deny Djuricic at the near post before heading down the tunnel at the break. The duo of Can and Lazar Markovic were looking a bit uncomfortable playing out on the left side and Rodgers elected to bring on Alberto Moreno in place of the Serbian during the interval to help shore things up while Koeman elected to introduce Morgan Schneiderlin to the fray as the second half got under-way.

Sadio Mane, brought on shortly before the hour mark would see his shot blocked by Martin Skrtel and Daniel Sturridge, introduced not long after, would combine well with Jordan Henderson as the stand-in skipper hit the strikers well placed pass over the crossbar as the match resumed its frenetic pace, but with Southampton unable to find the kind of space behind the wing-backs they enjoyed during the opening exchanges, they could only watch on as Liverpool added to their lead. Sterling, clearly enjoying playing run and gun with Moreno as his foil, failed to get on the end of the Spaniards final ball as it rolled well behind his run, but instead of sulking to the fullback, he got on the end of Matt Targett’s poor clearance to sweep past Fraser Forster and send both Rodgers and the travelling Kop into fevered celebrations.

A half chance here, a late scare there and a couple of wasted free-kicks later and the Reds were rolling back towards the North three points to the better. To be fair, it’s not a win that we’ll gloat over considering we were second or even third best for long stretches, but along with our renewed confidence comes a sense of entitlement to the points on offer and that served us well today. The slimmest of margins separate the chasing pack and we’re right there in the mix and on form; we’re not at our swashbuckling best quite yet and we may not make it there this season, but we’re winning games and at this stage of the campaign that can make all the difference.