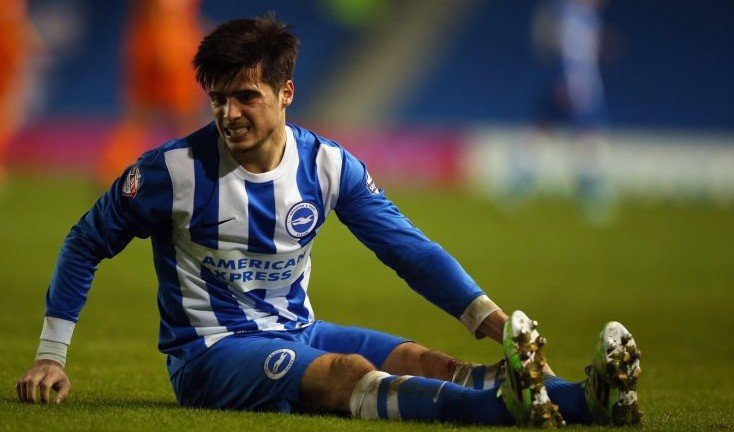 Liverpool loanee Joao Carlos Teixeira’s successful loan spell with Championship side Brighton & Hove Albion has come to a premature end with the forward set to return to Merseyside after breaking his leg during the scoreless draw with Huddersfield.

This comes as a massive blow to the Seagulls who are languishing dangerously close to the drop zone in England’s second tier. “Our thoughts are with Joao, as this is a real blow to him after such a good season for the club. We all wish him a speedy recovery and return to action,” said boss Chris Hughton in the wake of the Portuguese attackers injury. “He’s been an important player for the club this season, both before and after I came to the club, and I would like to thank him for his efforts during his time on loan here, and also Liverpool for allowing him to come.”

Teixeira, originally sent out on loan when Reds legend Sammi Hyypia was in charge at the Falmer Stadium, has played a big role at the club this season having made 32-appearances and scoring six goals in the process. The 22-year old never looked like nailing down regular football at Anfield this season, though he did reveal that he was looking to force his way into Liverpool boss Brendan Rodgers first team plans next term.

“I came to Brighton to become more mature and get more experience, and hopefully next year I will be playing for Liverpool. That is my dream,” said Teixeira in a recent interview. “I need to finish the season here and then I’ll go to Liverpool on May 2. I will be there for two more weeks and train so I can keep fit for the Euros. I will also have time to speak to the manager about my future.”