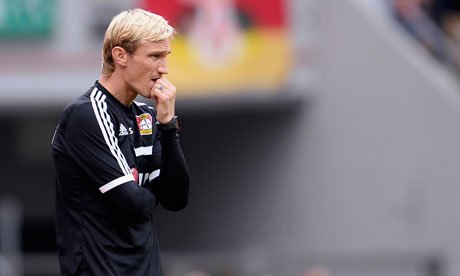 Although he’s gained experience steering clubs on his own with varying degrees of success, Liverpool legend Sammi Hyypia says wouldn’t be above joining a club as an assistant manager if the right opportunity came along — especially if it was one with the Reds.

After finishing a disappointing sixth in the Premier League last season, Reds boss Brendan Rodgers came close to losing his job following a far reaching season review with the clubs hierarchy. While the Northern Irishman scraped by, his assistants in Mike Marsh and Colin Pascoe weren’t quite so lucky with the duo believed relieved of their posts. It remains debatable whether a shake-up of the back-room staff will make any difference for the coming campaign, but what’s not in question is whether or not Hyypia would be welcomed by the Liverpool faithful with open arms.

The big Finn, who left his previous post in charge of Brighton and Hove Albion by mutual consent back in December, has put himself in the frame for an emotional return to Anfield by saying he’d be more than happy to help out on Merseyside if there’s a place for him. “It would be great to work for a club which I love,” he said. “I would definitely be interested if Liverpool think I could help them. I have great memories of my time at the club.” Liverpool supporters also have great memories of his time at the club — one when they didn’t regularly leak 45+ goals per season.

After spells with the Finnish national team and German outfit Bayer Leverkusen, the Reds legend struggled to find a groove in the Championship with the Seagulls, but after some time away from the spotlight, the 41-year is ready to get back in the trenches. “My rise in management was rapid and I have been thinking a lot about things while I have been out. If there were no interesting opportunities as a manager, then I would be ready to be an assistant,” confirmed Hyypia. “That sort of role would give me a lot of experience. It wouldn’t be a problem for me. I feel ready to go into football again. You look at yourself and I am enthusiastic about getting back into the game.”