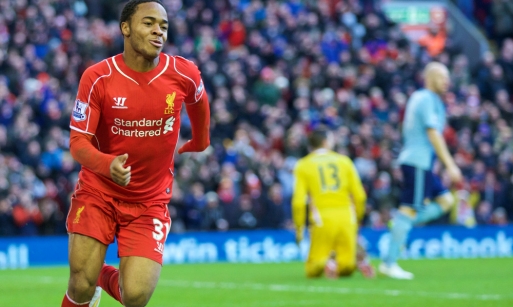 Well that didn’t take long, now did it? After previously rejecting a bid for want-away Liverpool winger Raheem Sterling from bitter rivals Manchester United, neighbours Manchester City decided to test the waters with their own opening salvo to the tune of £25mil which was promptly and emphatically rejected by the Reds.

The 20-year old, whose contract dispute with the Anfield outfit has been well publicized, is apparently on the top of City boss Manuel Pellegrini’s wish list with the club keen to add to their rather short list of home grown players. “It is a long summer ahead,” said Citizens shot-stopper Joe Hart. “With losing Frank and James – and I’m not in the discussions of transfers – I imagine, given homegrown players and stuff like that, it will be top of their list to bring in English players or to promote some of the lads [from the academy].”

Liverpool, who value Sterling somewhere in the region of £50mil, continue to insist that the youngster is not for sale despite the on-going impasse. Following a dire campaign that saw the Reds finish sixth in the Premier League and fail to add to their substantial haul of silverware, there were whispers that a lack of Champions League football would be the deciding factor as to whether or not the 20-year old would choose to extend his deal on Merseyside. City are expected to return with an improved offer in the coming days and should they move closer to what Liverpool value Sterling at, their resolve to hang on to a player that no longer wants to play for them could be tested.

After struggling in front of net last season, the money that would potentially be brought in from his sale could go towards securing the services of a world class striker. Sterling is far from the finished product and though he has the potential to blossom into a player with serious ability, for the short term, he can be replaced — a sentiment echoed by former Liverpool striker Michael Owen. “Put it this way: a year ago they lost Suárez and he’s irreplaceable,” explained the BT Sports pundit. “You cannot replace someone that good. If Liverpool lose Sterling, they can replace him with the money you get. He’s a very good player with lots of potential, but you can replace him. If I was a Liverpool fan, I’d obviously be wanting an answer [as to whether Sterling will stay or go] but I wouldn’t be losing sleep if he did leave and you got a fair old chunk of money for him.”