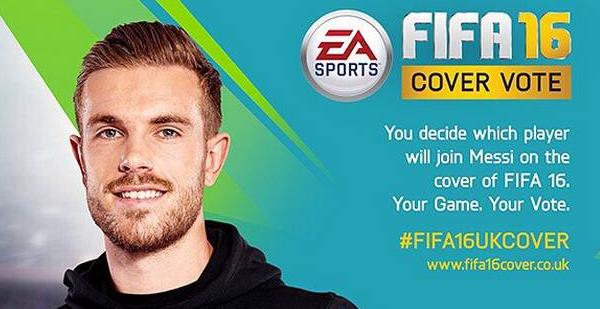 It’s a strange old world, isn’t it? With the launch of popular football video game FIFA 16 a few months away, EA Sports is trying to finish up the particulars before the best-selling franchises next instalment hits the shelves and they’re giving you the chance to vote on who you’d like to see on the cover alongside poster boy and global superstar extraordinaire Lionel Messi.

A host of Premier League stars in Manchester City hit-man Sergio Aguero, Tottenham Hotspur upstart Harry Kane and Chelsea ‘keeper Thibaut Courtois are all options, but the one name that will certainly catch the eye of Liverpool supporters around the world is their very own captain in waiting Jordan Henderson — and, as of the time of writing anyhow, the Reds midfielder is leading the voting.

Kopites around the world are sure to be flocking to the website in droves to get the 24-year old on the cover with the club launching the hash-tag #VOTEHENDERSON to spread the word on social media. Swinging by the website will earn you a vote, but you can have even greater sway over proceedings by sharing your choice on Facebook, Twitter or Google+. Voting, which is open until the 5th of July, is for the UK cover of the game only.