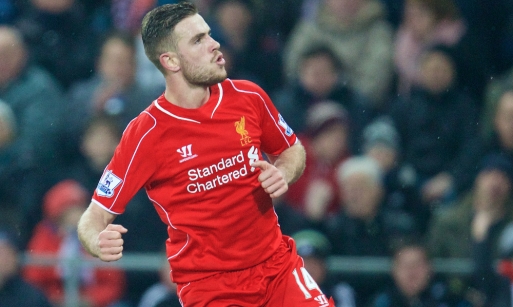 With long serving skipper Steven Gerrard already living it up in sunny Los Angeles before his move to Major League Soccer, Liverpool, for the time being anyway, are currently without a captain to call their own.

Jordan Henderson, who was handed the armband with increasingly regularity during the last campaign as the amount of matches Gerrard was involved in tapered off, has been tipped to take over where the 35-year old left-off, and during an interview for the FIFA 16 box cover challenge, he made his interest in adopting the responsibility of leading the Reds full-time known to the world.

“I’ve always wanted to take more responsibility, especially at the stage of my career I’m at. I feel I’m getting a bit older now, a bit more mature and of course I want to take more responsibility for the team but, at the same time, I think it’s up to all of us as a team to take more responsibility on the pitch and make sure we put in good performances,” explained Henderson in an interview with Goal. “When I’ve been vice-captain I’ve just tried to do my best for the team as I always have and to learn as much as I can from Stevie, like I have from when I first came to the club. But we’ve got a lot of captains and a lot of leaders in the dressing room so I’m sure whoever he picks, the lads will be right behind him.”

The current Liverpool vice-captain is leading the charge to join Lionel Messi on the cover art for the next instalment of EA Sport’s hugely successful sports franchise — FIFA 16. Fans can vote on who they’d like to see on the cover with Manchester City striker Sergio Aguero, Tottenham Hotspur hit-man Harry Kane and Chelsea shot-stopper Thibaut Courtois joining the Liverpool midfielder in the running. Although he hasn’t been officially given the job quite yet, how cool would it be to have the Liverpool captain on the cover of FIFA?

Now get out there and #VOTEHENDERSON