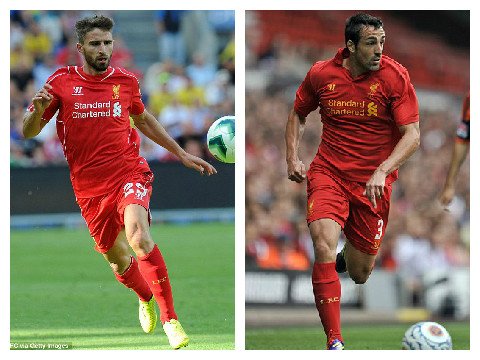 With Liverpool midfielder Lucas Leiva contemplating his future ahead of a season in which his role in the squad looks like it’ll be increasingly marginalized, Reds duo Fabio Borini and Jose Enrique appear to be on the other end of the spectrum — happy to stay on with the Anfield outfit despite being alienated by boss Brendan Rodgers unless their wages can be matched by another side.

Although both players look set to leave before the transfer window closes, Liverpool have had problems shifting both of them on. Borini, who has reportedly been in talks with Italian side Fiorentina over a move back to Serie A, is now being linked with a loan to Sunderland where he enjoyed his most successful spell in England as he helped the Black Cats retain their top-flight status two seasons ago.

The Reds had agreed to a £14mil deal with then boss Gus Poyet that would have seen the 24-year old move to the Stadium of Light on a permanent basis, but the deal fell apart with the player reportedly unable to agree to terms, hoping that a “bigger” side would come calling — and when no one did, a deadline day move to Queens Park Rangers was also rejected on the back of him having to take a pay-cut to move to the capital. With a shoulder injury ruling winger Adam Johnson out for the next two months, Sunderland boss Dick Advocaat has reportedly set his sights on Borini to help fill in for the England man, and with Liverpool keen to get rid of the Italian, a move could materialize quickly.

The same, of course, could be said about Enrique if West Bromwich Albion still have an interest in the fullback after he said that he’d be open to staying at Anfield and that a move to another side would be a “step down” for him. Riddled by injuries and then obviously falling out of favour with Rodgers, the Spaniard has been forced to train, along with Borini and Mario Balotelli, away from the first team as the club works diligently to get the unwanted trio off of their books.

Confirming that he’s had an offer to return to Spain, Enrique shed a little light on why he might be interested in staying at Anfield despite not being in the managers plans for the coming season. Although he said that he believed he’d get games if he stuck around, his financial motivations were only barely concealed — and it’s hard to blame him, considering he’s getting paid to play ping-pong and take in the sun. “I had a very good option to return to Spain, but is complicated because the economy is very different from what exists here,” explained the Liverpool fullback.”The only teams that can deal with what is paid in England are Real Madrid and Barcelona.”