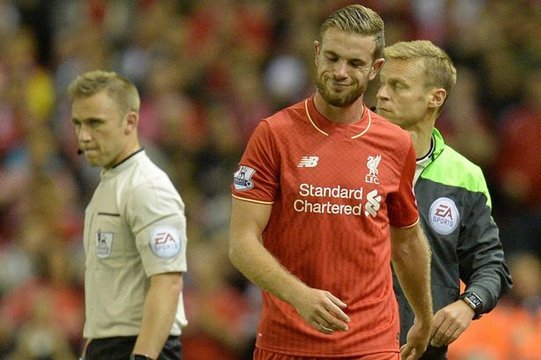 Despite getting having scans on his foot come back clearing the Liverpool captain of a suspected cracked bone, Reds midfielder Jordan Henderson has admitted that he may miss Monday’s trip to the Emirates Stadium, explaining that he needs to take his long term fitness into account before deciding whether or not he’ll be fit enough to run out against Arsenal.

“I am getting assessed day by day. It is all about pain, symptoms wise. When everything settles down I will be OK but I don’t know when that will be,” explained the newly appointed skipper. “I have done something with my heel, so every time I plant my foot whether running or walking I can feel it. It has settled down over the last few days but I don’t know what it will be like in terms of Monday. I just have to keep doing what I have been told by the physios in terms of treatment,” continued Henderson. ““I want to play on Monday but, if I can’t, I need to get fit as soon as possible. The problem is if I do play what is the risk and how long could I be out potentially if I do something in the game? That is up to the manager and the medical team as well.”

Withdrawn with a little less than half the match left to play in Monday’s win over over AFC Bournemouth, boss Brendan Rodgers confirmed following the final whistle that Henderson had been struggling with injury and barely trained in the build-up to the meeting with the Cherries.

“I had pains in the bottom of both feet for a few months really, but nothing too major. Then in the last 10-15 minutes of the Stoke game I felt it bad and I couldn’t really put my weight on it,” clarified the 25-year old. “I couldn’t train for the next week, but managed to play in the game. Then in the Bournemouth game, in the second half, it was a case where it was painful again and, with 40 minutes to go, it was wise to bring me off.”