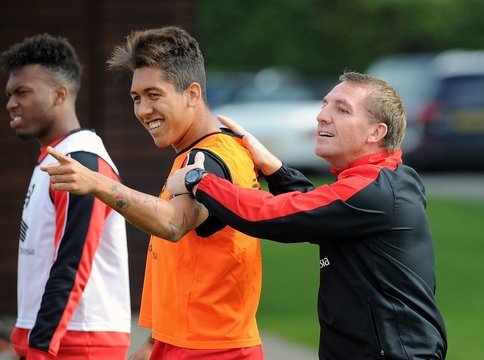 It’s been de rigeur for quite some time now to not bother trying to introduce the match that as the old cliche goes “needs no introduction”, so I’m going to stick with the trend if only for a lack of interest in trying to buck it; if you don’t know by now what Liverpool versus Manchester United means, you’re obviously new around these parts.

Obviously, it’s the decades of history that keeps this rivalry so fierce, but it’s the normal day to day happenings around football that always adds the spice to keep it interesting. Although both sides are sitting on seven points after starting the season not quite as bad as they could of, but definitely not as good as you’d expect from a pair of teams that invested so heavily throughout the summer, the pressure to get a result tomorrow has been amped up that much more.

Losses just before the international break have put both mangers under the microscope, but you could argue quite easily that Reds boss Brendan Rodgers will be feeling the heat far more than his counterpart in Louis van Gaal. The surprising news that want-away goalkeeper David De Gea has signed a new four year deal with the club has put a feather in the Dutchman’s hat even if he’s not sure he’ll toss the Spaniard right back into the fray.

After being named Player of the Season for two years running, the news will give the United support a much needed boost to go alongside Wayne Rooney breaking Sir Bobby Charlton’s long standing scoring record for the England national team and the news that Michael Carrick should be fit enough to feature after he overcame a calf injury he picked up while on duty with the Three Lions.

Liverpool, on the other hand, haven’t exactly had fortune smile so broadly upon them. Suspended for the trip to Old Trafford after picking up a pair of yellow cards in the loss to West Ham United, Rodgers will be without Philippe Coutinho — one of the two players at his disposal that have found the net this season. The other, in Christian Benteke, was hauled off at half-time during Belgium’s narrow win over Cyprus on Sunday with his performance slated from all corners following the final whistle. Add to that Liverpool captain Jordan Henderson’s ongoing foot injury and Adam Lallana’s thigh problem and it’s likely that we’ll see the same side that lost in spectacular fashion to the Hammers, only without our most creative player.

United, of course, won’t be without their own problems with defender Phil Jones missing out despite returning to training this week. Utility man Daley Blind is expected to be deployed as a makeshift center-back alongside Chris Smalling, but the Dutchman’s lack of a physical presence could throw up some problems should the visitors find a way to get Benteke on the ball more often than they did against West Ham. The imposing 24-year old has a knack for using his substantial frame to bully the opposition and he’ll be looking to do just that at every opportunity this weekend — after an ineffective display in his last outing for the Reds and a dire appearance for Belgium, he’s got a point to prove.

In reality, there’s a whole lot of players on both sides that’ll be looking to do the same come Saturday. It’s still early days, but the likes of Roberto Firmino and James Milner for Liverpool and Memphis Depay and Bastian Schweinsteiger for United have yet to live up to their substantial billing after making their respective moves over the summer; if there’s one fixture to make your mark in, this is without question the one you want to do it in.