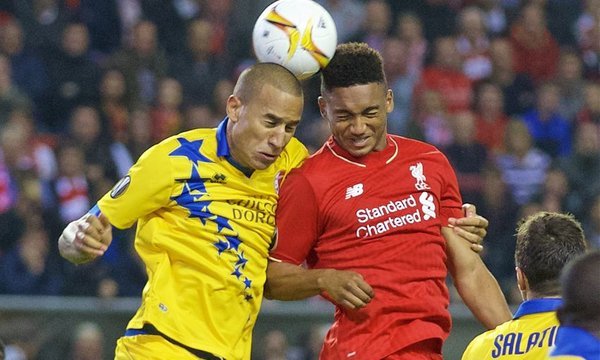 There may be no such thing as an easy match, but when Liverpool make the simple things look much harder than they need to be, they labour to a unremarkable draw with a team languishing in the middle of the Swiss Super League — one that they should be beating handily.

The Reds got off to a blinder of a start when Adam Lallana’s cool finish within the opening five minutes gave FC Sion the welcome to Anfield that they deserved, but in typical fashion the hosts failed to build on the momentum and when one of those predictable lapses of concentration reared it’s ugly head, the impressive Ebenezer Assifuah took advantage to restore parity before 20-minutes had been played.

You’ve seen this match before; the draw with newly promoted Norwich City and the penalty shoot-out with League Two side Carlisle United come quickly to mind. Liverpool boss Brendan Rodgers has made no secret of his plan to use this competition to give the players on the fringe of the squad and the kids a chance to get out on the pitch and that’s what we saw — a second string side playing second rate football in the kind of night that we’re becoming increasingly familiar with and even more increasingly resigned to seeing.

With their domestic campaign in the dumps, the visitors had no expectation on their shoulders and really nothing to lose come kick-off and it looked like they’d studied their script well when Lallana banged in the opener. Offside during the build-up, the 27-year old wasn’t flagged for one reason or another and after Divock Origi beat two men to get the ball across the face of goal, the former Southampton man finished from close range with the kind of composure he was known for during his time at St. Mary’s.

Danny Ings, looking to stake a claim for a spot in the Merseyside Derby on Sunday, spurned a glorious chance to double their advantage after good work from Joe Allen gave the striker a golden opportunity, and just like that their lead was gone. Nathaniel Clyne, not usually one to play a wayward pass, gave the ball away cheaply and Joe Gomez, out of sync with the rest of the back-line, played Assifuah onside as the Ghanaian latched on to a cute ball over the top and he finished through the legs of a sprawling Simon Mignolet — I saw it coming, you saw it coming, even Alexi Lalas saw it coming.

Too slow in the build-up, not clinical enough when it mattered, lacking in creativity, short on ideas, constantly caught in two minds and just plain sub-par — second string footballers playing second rate football in a second tier competition that look a bit too much like our first string that consistently comes up second best.

On another night in another season I’d be explaining how Didier Tholot’s side only barely hung on to share the spoils and ruin the party, but this is then rather than now and Sion pressed their hosts until the bitter end. A little bit of luck for either of them, a lot more decisiveness from Origi when he found himself clean through on goal, some dip on a dangerous looking free-kick from Carlitos or Lallana shooting anywhere except straight at Sion shot-stopper Andris Vanins and we’d have a different scoreline.

Cameo appearances for Philippe Coutinho, Alberto Moreno and Mamadou Sakho in the second half gave this side a kick-up in the quality department, but it never looked like it was going to be enough. Maybe that’s OK in the grand scheme of things with the Premier League the obvious focus and this competition being devalued, but Liverpool, for me, are about winning games and bagging silverware. This was another performance in long string of performances that that makes me realize just how disconnected from reality that’s become…