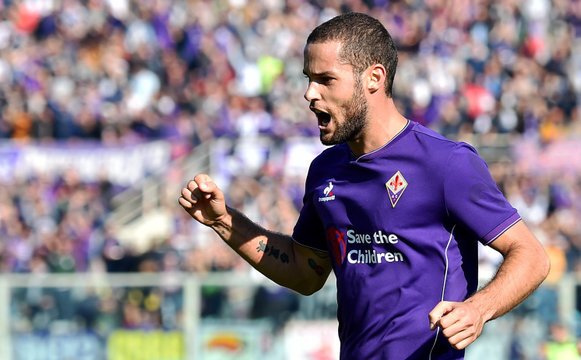 It’s way too early to start talking transfer rumours, but with speculation heating up over the future of Fiorentina midfielder Mario Suarez, the Spaniard has moved to quash any talk of him leaving Serie A when the transfer window re-opens in January.

Heavily linked to Liverpool throughout the summer, the former Atletico Madrid move chose to move to Italy instead, but is reportedly unhappy at his lack of first team chances. The 28-year old, who scored his first goal for the Viola yesterday during a 4-1 demolition of Italian minnows Frosinone, has been used sparingly by boss Paulo Sousa this season with only five appearances in the league thus far despite his many talents. This might have the rumour mill all fired up, but Suarez says there’s nothing doing and he’s staying put.

“I am extremely grateful to the club,” the Spaniard told reporters after the game. “I’m especially thankful towards the Della Valle brothers and [Fiorentina sporting director, Daniele] Prade, as well as the fans who shown their confidence in me,” enthused the 28-year old. “Today the coach decided to use me and I’m glad for both for myself and for the team,” he continued, before addressing rumours that he’ll be angling for an exit this winter. “I’m staying here, I’m very happy at Fiorentina.”

At almost 30-years old, Suarez might be a bit long in the tooth for the Reds hierarchy to seriously consider making a move for him, but there’s suggestions that they’re willing to bend to the will of Klopp as the German looks to build a team capable of employing his signature high-pressure, full throttle style of football. A solid defensive midfielder with good movement both on and off the ball, the Spaniard fits the bill, but it sounds like he wants to stay in Italy. We’ll see what his agent has to say about that…