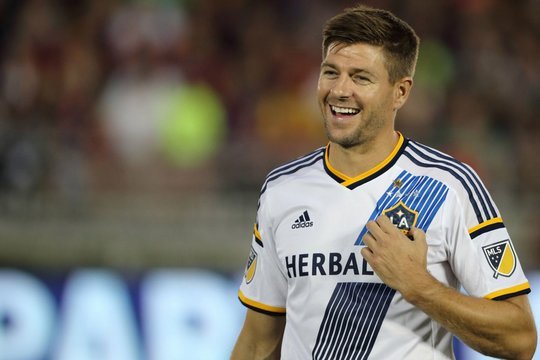 The rumour mill has been abuzz with stories about Liverpool legend Steven Gerrard making a sensational return to the club on loan in Janaury, but the LA Galaxy have confirmed that they have no intentions of sending the 35-year old out on loan, while the Anfield outfit have said that the door to Melwood would always be open to him — but the one to the pitch? Maybe not so much.

“Yes, I heard about it a few moments ago – one of your colleagues told me. I can say I have had contact with Stevie. We’ve had one phone call and a few messages. Of course, I said the door is always open,” said Reds boss Jurgen Klopp ahead of the Europa League meeting with Rubin Kazan later today. “Stevie is a legend and it’s clear that if he is here in Liverpool and is young enough and healthy enough to want to train for the next season in LA, then absolutely no problem. That’s clear, but nothing else,” he said, sidelining suggestions that he’ll be playing for the side again. “He didn’t ask and I don’t have to think about this. He is an LFC legend and our doors are always open.”

After leaving Liverpool when his contract expired at the end of last season, there were rumours from the off that Gerrard would look to play for the Reds during the Major League Soccer off-season, but they’ve been refuted from the get-go with MLS commissioner Dan Garber revealing that a clause built into his contract outright prevents it. We all know that sometimes these rules can be bent, but it doesn’t look like his team are about to make any exceptions.

“I don’t believe it is at all accurate,” explained LA Galaxy boss Bruce Arena during a roundtable discussion with local reporters when the subject of Gerrard playing for Liverpool on loan was inevitably broached. “There’s not any truth to any of this. It’s ridiculous,” he continued, obviously flustered by reports from across the pond sharply contradicting that notion, but the former USA national team coach did say that he was open to the 35-year old training with his former club during the off-season. “Of course,” said Arena matter of factly. “Why not?”