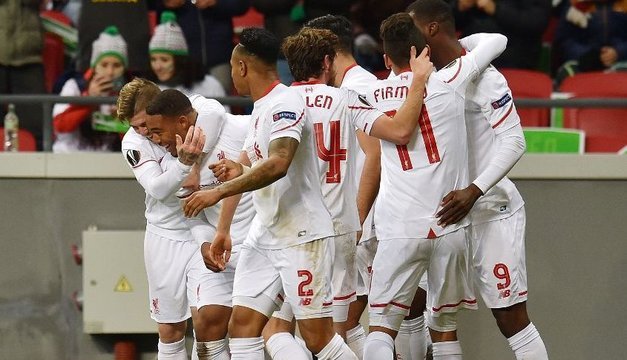 Liverpool took a massive step towards securing progression to the knock-out stages of the Europa League with a convincing — if not altogether frustrating — win over Rubin Kazan in which Jurgen Klopp’s side dominated completely for large portions, but like the first leg, failed to apply the coup de grace.

Thankfully, they were able to get away with it this time; after drawing their first three matches, Group B was wide open, but thanks to Jordan Ibe’s first competitive goal for the Reds early in the second half, they’ll be able to book their place in the next round if they beat French side Bordeaux, who drew with table toppers FC Sion earlier today, when they visit Anfield in two weeks time.

That makes it three wins on the hop for Klopp who bagged his first League Cup victory against AFC Bournemouth last week before downing Chelsea at Stamford Bridge on Saturday. Making only a pair of changes from the side that beat the Blues at the weekend, the German boss backed up his words with actions by naming a starting eleven full of senior players and showing that the Europa League is a competition that this club wants to win — though it was a youngster that was responsible for making sure we left Russia with all three-points.

“The result and the first 80 minutes were really good,” said the Reds boss following the final whistle. “It was not easy to play today because there was a fantastic atmosphere in the stadium. It’s a really good place to play football but the pitch is not in the same shape as the rest [of the stadium],” he explained. “It was not easy for the team and it was more about possession. We did really well, we had our chances and could have had more [goals]. We deserved our goal and then, as it is in life, we have to learn everything – and we have to learn to win.”

Despite enjoying a whopping 68% of of the ball and getting off 23-shots, the Reds remain hit or miss in the final third — unfortunately, for now, they’re mostly miss. James Milner, taking advantage of some good work from Roberto Firmino, hit the crossbar in the early going as the visitors looked to start brightly and not long after Christian Benteke had a header cleared off the line with Kazan defender Solomon Kverkvelia doing just enough to keep the big Belgian off the score sheet.

Firmino dragged a shot wide as time ticked away and Tartars ‘keeper Sergei Ryzhikov would keep out a telling cross from Ibe that took a wicked deflection, but the hosts finally cracked under sustained pressure from Liverpool with the 19-year old bagging a superb solo goal, ending his run from just past the half-way line by slotting home a powerful low drive that banged in off the post.

Last season we were talking about Ibe’s progress in the same way that we discussed the meteoric rise of former club mate Raheem Sterling, but in an early season dip in form and an obvious lack of confidence saw the 19-year old fail to impress during the final days of former boss Brendan Rodgers. He, of course, wasn’t the only one, but the about face in his performances since Klopp arrived on Merseyside has been something to behold.

The youngster could have had another in the closing stages when Adam Lallana slipped him through only to see Kverkvelia get down low and push his goal bound shot away from danger. Mostly content to sit back and soak up pressure for much of the match, Valeri Chaly’s men were forced to come out of their shell late on as they looked to restore parity, but the damage had already been done. Of the 7-shots they registered, not a single one troubled Simon Mignolet with the defence just too compact and organized for them to break down — I don’t even remember the last time I was able to say that.

At the risk of sounding like I’m on repeat, there are changes afoot at Liverpool and they are good in every sense of the word. Improved performances are being translated into results and, really, what more can you ask for? It’s still early doors around these parts and we’ve got a meeting with perpetual bogey men Crystal Palace on Sunday, but that particular meeting doesn’t carry the same amount of dread it once did. Even for this old curmudgeon, life is looking pretty damn good.