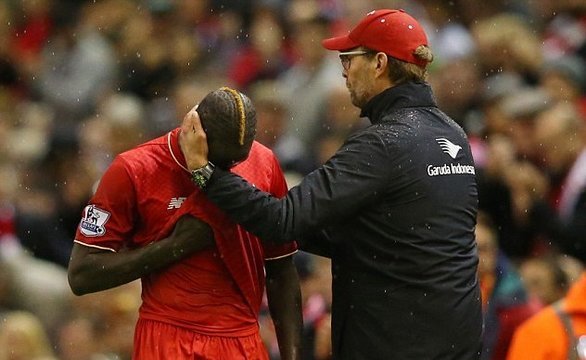 If seeing Jurgen Klopp’s six game unbeaten run since taking over as Liverpool manager come to an end wasn’t bad enough, Liverpool supporters around the world had to watch on in horror as defender Mamadou Sakho limped off the field with a knee injury during the 2-1 defeat at the hands of Crystal Palace.

The Frenchman has been in fine form since the former Borussia Dortmund supremo ended his sabbatical early to take over for Brendan Rodgers, consistently showing that he’s far and away the best defender the Anfield outfit have at their disposal. Pictured leaving the stadium on crutches and with his knee in a brace, Sakho will now be sitting out France’s friendly matches with England and Germany as the Premier League season is interrupted for yet another round of meaningless internationals.

An extended break could, of course, be the best thing for the 25-year old, but whether or not he’ll be fit following it is an entirely different story altogether. Landing awkwardly after challenging Crystal Palace attacker Yannick Bolaise for a header, the defender initially tried to play on with the Kop chanting his name, but he’d be replaced by Dejan Lovren just before the half-time whistle.

“I don’t know. It’s too bad that he couldn’t play on, but we have to wait for the scan tomorrow evening, because it needs a little bit of time,” said Klopp following the final whistle. “I don’t want to speculate, but of course we hope that it’s not too serious. That was the worst thing in the game, I would prefer to lose 4-1 and keep him in the team. Now we have to see.”

Set to go for a scan tomorrow, Liverpool should have a pretty good idea how long he’ll be out for once they have the results, but for now, he’ll join a growing list of Reds on the treatment table — one that includes vice-captain James Milner. The England man is also expected to miss out on international duty after a hamstring problem picked up against Rubin Kazan on Thursday kept him out of yesterday’s meeting with the Eagles despite Klopp initially believing that he was fit enough to play.