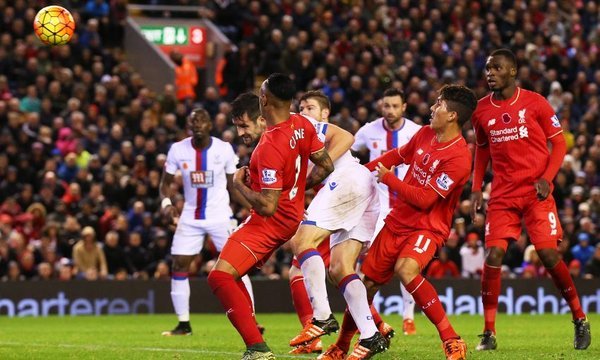 After watching Liverpool run out three successive wins on the hop that included progression the the League Cup, victory over Chelsea at Stamford Bridge and their first Europa League triumph this season, it’s very much back to life and back to reality for Reds supporters around the world with Crystal Palace doing exactly what Crystal Palace do in a 2-1 reversal at Anfield earlier today.

Storming to an early lead through Yannick Bolaise after some disappointing defending from Alberto Moreno and Emre Can handed the Eagles a deserved opener, the hosts took the match by the scruff of the neck and were level before the half-time whistle with Adam Lallana’s clever flick from a teasing Jordon Ibe cross running straight into the path of Philippe Coutinho to fire past a helpless Wayne Hennessey. On level terms and looking the better to go on and win, Liverpool did what Liverpool do, spuring a number of good opportunities before Scott Dann got not one, but two headers on target from a well worked corner with the second beating Simon Mignolet for pace.

For all the smiles and hugs and unbridled celebrations that Reds boss Jurgen Klopp is known for, the German manager will be absolutely fuming following that result. He may not show it to the media, full of humble grace following the final whistle, but in the dressing room it would have been another story. At least, I would hope it’d have been — you can only kill so many bad habits with kindness.

That’s not to say that we didn’t play well; actually, it was quite the contrary, but our penchant for making the worst possible mistake at the worst possible time coupled with our shocking inability to put a shot on target has come back to haunt us again. When you have 64% of the ball, you should be able to find more than a single goal and when you manage 22-shots, you should put more than four on target.

Despite putting in decent performances against AFC Bournemouth and Rubin Kazan, they were narrow victories at best and ones that should have been achieved on wider margins; today, that caught up with us. Of course, that’s taking absolutely nothing away from Palace who were compact, organized and patient throughout with the defensive trio of Dann, Damien Delaney and ex-Red Martin Kelly all putting in noteworthy performances.

They didn’t get much of the ball, but when they did they were positive and used it well, more than happy to absorb pressure and wait for their chances, while the obvious point that a more clinical side would have punished them several times over is neither here nor there. Christian Benteke, who looked sluggish on Thursday in the Europa League, may have been suffering a long-haul hangover with the Belgian missing out on more than his fair share of opportunities while Can, who was culpable for the Eagles first goal, showed once again that he needs to be far more aware of what’s going on around him when the team is on the back-foot.

We already knew there were lessons to be learned, growing pains to be had and the kind of familiar failings all over the park that plagued us under Brendan Rodgers to be eradicated — maybe the optimism springing out of going six matches unbeaten and the sweeping improvements that Klopp has already made makes this loss all the more jarring, but we move on.

Anyone who watched the match and isn’t a perpetual moaner knows that this wasn’t a performance worth complaining too much about despite the altogether laughable post-match furore spewing across to social media stratosphere. Full credit and fair play to the visitors, but they were second best on the day even though they came away with all three-points. Alan Pardew, who hardly gets the credit that he deserves, obviously has a dodgy looking Mighty Red voodoo doll in his briefcase — I really think that’s the only way I can rationally explain all of this to myself and still come out feeling alright.