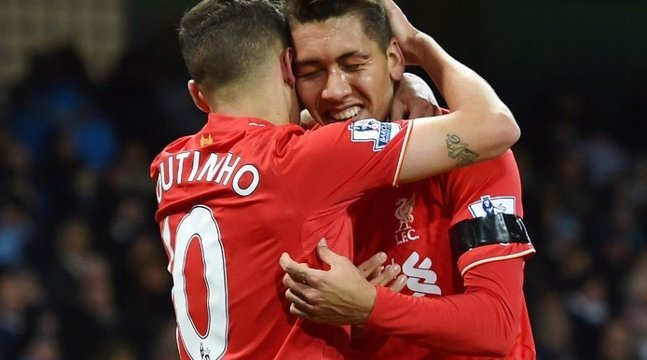 Manchester City may not have been at their best today, but even when the Citizens are at their worst, their often better than a most sides best; for Liverpool the age old adage of “you can only beat what’s in front of you” might apply, but the Reds did it in a such resounding, spectacular fashion that how their hosts were playing hardly warrants the mention it just got.

The Anfield outfit made the short trip up the M6 looking to disrupt the champions elect, and they did just that. Never letting them settle in possession, Roberto Firmino, given the nod ahead of Christian Benteke in a move similar to what we saw in the win over Chelsea, saw his cutback bang in off Eliaquim Mangala to open the scoring before the 10-minute mark and it just got worse for Manuel Pellegrini’s side — and better for Jurgen Klopp’s — from there on out…

Philippe Coutinho would add a second just over fifteen minutes later on the back of a raucous counter-attack; the high line once again halting City in their tracks and launching bodies forward, Firmino weaving and dribbling before a neat pass landed plum on the feet of his compatriot to finish through the legs of Joe Hart and double the advantage. If leading by two at the Etihad early in the first half was hard to believe, going three-goals to the good before the break had the opposite effect as the travelling Kop swayed and bayed for more.

With the Citizens absolutely rocked, Emre Can’s back-heel at the edge of the box caught everyone out with the exception of the Brazilian duo. Harrying, harassing and pressing high, the German midfielders inventive flick rolled through the hosts backline to Coutinho and his tap across the face of goal ended with Firmino coolly slotting home his first goal since his big money move from Hoffenheim over the summer.

That the 24-year could have had two more before the break wasn’t surprising in the least and that they came on the back of the Little Magician’s handiwork was even less so, but there were few complaints during the intermission even after Sergio Aguero pulled one back when the Argentine capitalized on a rare defensive error from a Reds back-line that were surprisingly well organized to lash an inch perfect, curling effort past a diving Simon Mignolet.

He almost added a second midway through the second half when Raheem Sterling, anonymous up to now, latched on to a poor back pass from James Milner before teeing up the on-rushing striker, but the Reds ‘keeper was able to scramble across the face of goal to save in fine fashion. City may have come out after the break looking the more likely to score, but that would be their only golden opportunity and they’d be left to rue missing it when Martin Skrtel added the coup de grace with just under 10-minutes left to play.

The fresh legs of Jordon Ibe and the strength of Benteke were key to a counter-attack that ended with the Belgian one and one with Hart, but the English ‘keeper would come out on top, but he’d be powerless to keep out the big Slovakian’s effort from the resulting corner with Skrtel thumping one on the volley that was the perfect mix of placement and power.

After a result like that, it’s hard not to get carried away — especially after the loss to Crystal Palace — but there’ll be time for pragmatism later. At the tail end of last month we won away to Chelsea and today we’ve done the same against Manchester City. I’ve never been one to turn down a good reason to celebrate and I’m not about to start. This is a Liverpool side on the up; it’s going to take us a while to get there, but it’s nice to be heading in the right direction again.

3 thoughts on “Manchester City (1) Liverpool (4): It’s Nice to be Heading in the Right Direction”