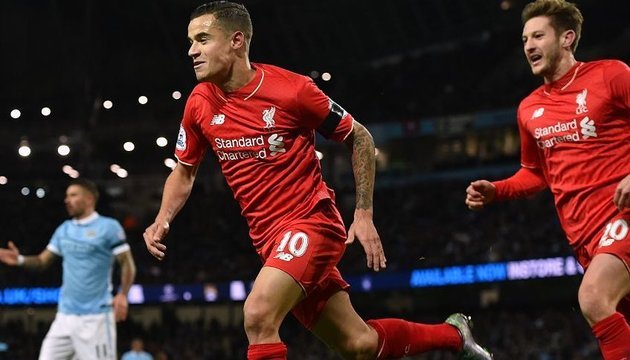 Withdrawn with just over 20-minutes left to play of Liverpool’s 4-1 win over former Premier League pace-setters Manchester City yesterday, there were concerns that Philippe Coutinho could be set for a short spell on the sidelines with the Brazilian hobbling off the pitch at the Etihad Stadium with what appeared to be a muscle problem.

The Little Magician, who was part of a Samba double act with compatriot Roberto Firmino, scored one and assisted one as Liverpool bagged three first half goals. Citizens striker Sergio Aguero pulled one back a minute before the break, but Martin Skrtel would thump a volley past Joe Hart to seal all three-points before the final whistle was blown. By the time the Slovakian defender added the coup de grace, Coutinho had already been replaced by Jordon Ibe, but Reds boss Jurgen Klopp has moved quickly to quell any doubts over the fitness of the 23-year old.

“I hope [he] is well enough,” the German manager told reporters in his post-match press call. “He showed not a real [injury], it was a little bit of cramp, he felt something,” he continued, playing down the substitution of the Brazilian. “I hope that’s all, he will be very important for us, everybody can see he’s in really good shape in this moment,” added Klopp, hopeful that there’ll be no further complications. “I hope he can react well enough.”

With five goals in his last 12-appearances, it’s safe to say that losing the Brazilian would be a massive blow. While Liverpool’s injury problems are abating slightly with Daniel Sturridge, who was an unneeded substitute at the Etihad, and Jordan Henderson, who didn’t make the bench but is ready to return to full training, returning to the fold things are looking up for the Anfield outfit. The last thing we need is a knock to Coutinho ruining that momentum…