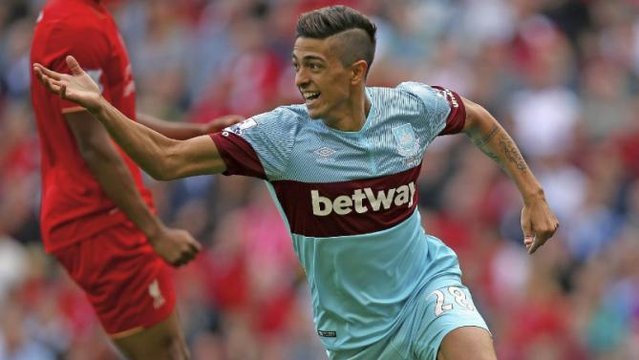 With the winter transfer window inching closer there’s been no shortage of chatter from the rumour mill with Liverpool boss Jurgen Klopp apparently looking to bring in a few new faces to bolster the Reds push for a top four finish this season. While a move for heavily linked Al Jazira midfielder midfielder Manuel Lanzini wouldn’t happen until the summer anyway, the 22-year old looks set to make his loan spell at West Ham United permanent with both the club and the player angling to make it happen.

“It’s an absolute honour that a team like Liverpool has put an eye on me, but at moment I am focused on the match against Tottenham. It’s a good team to play against,” said the Argentinian playmaker prior to the 4-1 drubbing at the hands of the North London side on Sunday. “I heard the president say that the club wants me to stay,” he continued, reflecting on David Sullivan’s comments last week before confirming that staying with the Hammers would be just dandy. “I am fine here,” added Lanzini.

While that’s not exactly the most ringing endorsement one can give to a club, it’s not one that can really be argued with considering West Ham have an agreement with the UAE club that gives them first crack at his signature following his loan spell at Upton Park. In his last ten outings, Lanzini has scored four goals, chipped in with an assist and put in two Man of the Match performances — no wonder he’s caught Klopp’s eye.

“I know there have been some reports in the media over the weekend surrounding the future of Manuel Lanzini,” he told West Ham’s official website as he played down speculation over the future of the 22-year old midfielder. “We have an unbreakable option with both Lanzini and his club, so any other team’s interest is irrelevant,” continued Sullivan, making it known that they’re not about to bow to pressure from bigger clubs. “Manuel has been a fantastic signing for the club and we all hope he can maintain this superb run of form for the rest of the season.”