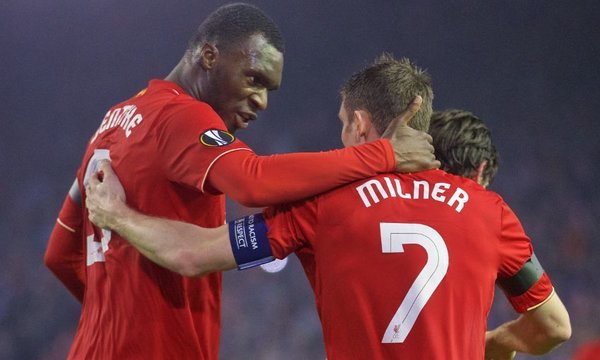 It took a bit of doing, but Liverpool are guaranteed a spot in the knockout stages of the Europa League after coming back from a goal down to edge out Bordeaux at Anfield last night and in turn send the French side crashing out of the competition.

A bit of a brain fart from Reds ‘keeper Simon Mignolet saw him give up a free-kick inside the area after the Belgian held onto the ball for a full 20-seconds and Bordeaux winger Henri Saivet curled home to give the visitors the lead. It was short lived though with James Milner lashing home a perfect penalty after Christian Benteke was clattered in the area and the big striker adding one of his own with a thumping effort just before the stroke of half-time.

Anything but a loss in the final match of the Group Stage where they’ll travel to Switzerland to square off with FC Sion will see Jurgen Klopp’s side top their group and go into the Round of 32 with what should hopefully be a more favourable draw — a prospect the German boss is pleased with.

“[Finishing] top of the table is important, but not the most important thing because there are only good teams in the next round, he explained in his post match press call. “We will try everything when we travel to Sion in two weeks, but there are 50 games between then and now!,” he joked, flashing that all too familiar smile before getting back to business. “We have to think about Swansea from tomorrow onwards and that’s what we will do.”

Despite making some changes to the side that ran out 4-1 winners over Manchester City at the weekend, there were some tired legs out there with they normally dominant Reds fading as the match progressed. Surprisingly enough, it was the visitors that edged out their hosts in the possession stakes, but they struggled to create too much by way of real quality chances with their hosts all too happy to bully them all over the pitch with their improving pressing game. To be fair, if it wasn’t for Bordeaux ‘keeper Cedric Carrasso, the scoreline could have been be vastly different.

The Frenchman was on hand to make a number of clutch saves as the Reds looked to run up the scoreline with the veteran shot-stopper getting down well to keep Benteke from claiming his brace and Jordon Ibe, who was a constant threat throughout, from getting on the score-sheet at all. That the Reds failed to add some insurance during the early stages of the second period would have been a major cause for concern only a short while ago, but their compact shape and a relative lack of creativity from the visitors meant that another free-kick from Saivet — which was palmed away by a diving Mignolet — was their only other chance of real note.

That, of course, is just fine by me. With a meeting with Swansea City this weekend, a tricky League Cup quarter-final with Southampton and a trip to struggling Newcastle United all coming before our last group game, it’s nice to have a spot in the next round already done and dusted. I could really get used to this whole Liverpool playing decent football thing…