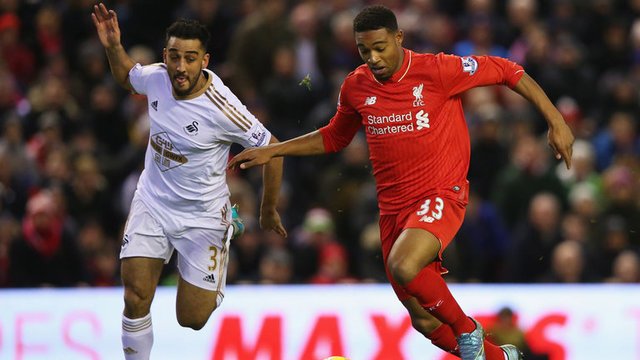 It might not have been the most fashionable win, but a James Milner penalty was enough to see Liverpool past Swansea City at Anfield yesterday in a result that did the Reds a world of good.

Capping off a week that saw them down Manchester City 4-1 at the Etihad Stadium and secure progression to the next round of the Europa League by brushing aside French side Bordeaux, the Reds made it three-wins on the bounce by putting one over on the Swans. With the likes of Manchester United, Tottenham Hotspur, Arsenal, Everton and Chelsea drop points, Liverpool climbed to sixth in the table — a position that Jordon Ibe would like to improve on.

“The manager didn’t want to focus on any other team, just focus on us and keep that consistency, keeping winning games and trying to get the three points,” said the youngster following the final whistle. “It was great to get the three points and keep climbing the table. We just need to keep doing well,” explained Ibe. “Hopefully we will climb even higher. Anything is possible. We will take it game by game and do it again on Wednesday [at Southampton in the Capital One Cup].”

One game at a time and one competition at a time; things haven’t slowed down for Liverpool boss Jurgen Klopp since he arrived at Anfield and at this time of the year there will be no respite from the onslaught of fixtures with another Europa League match just over the horizon and the grueling festive program still to come. Thankfully, the German manager was able to call on the likes of Jordan Henderson and Daniel Sturridge yesterday as the star duo returned from their respective injuries. Things are only going to get busier…