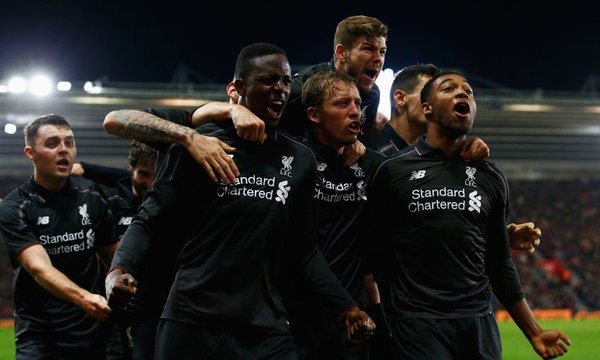 Southampton might have got the home fans rocking within the first minute of the match when Sadio Mane nodded Ryan Bertrand’s cross past Liverpool ‘keeper Adam Bogdan, but that’s about the only thing the Saints got right on the night as the Reds scored six unanswered goals to set up a League Cup semi-final tie with the dreaded Stoke City.

Daniel Sturridge, making his first start under new boss Jurgen Klopp, bagged a brace before the half hour mark, finishing from a tight angle before smacking home Emre Can’s cheeky dink over the top of the Southampton defence first time. Divock Origi would score the first of three when he got the slightest of touches on an Alberto Moreno blast from distance just prior to the half-time whistle and the Belgian would follow that up with a thunderous effort of his own and a simple header past a stranded Maarten Stekelenburg to complete a perfect hat-trick. To add insult to injury, Jordon Ibe showed immense control to chest down a cross from the left before driving the final nail into Ronald Koeman’s dreams of guiding Southampton to the next round.

“That is not the result we expect. A great start but if you make the mistakes defensively we did in the first half and the top quality of Liverpool, then you can lose,” explained the Dutchman after the final whistle. “The second half is my responsibility. I changed the system, I made the risk of three at the back,” he continued, taking the blame. “The first goal of Liverpool is a throw-in and you see how easily they play, that is not good. The have a great energy and they have qualities in the team,” explained Koeman before adding, “We gave them that space, those opportunities and if you give a man like Daniel Sturridge that space he will kill you.”

That, of course, sells this side short just a touch. While there’s no denying that both of Sturridge’s goals were picture perfect, it was the response from the whole team that really made the difference. There’s no such thing as scoring too early and the hosts looked good to add a few more with Connor Randall, standing in for ex-Saints fullback Nathaniel Clyne, picking up an early booking and the entire back line, including the excellent Alberto Moreno, looking out of sorts during the first knockings.

You don’t need me to tell you that there’s been a dynamic shift at Liverpool since Klopp took over for Brendan Rodgers and we saw it in the mentality of the players and their willingness to not onlh work for the equalizer, but to not panic and try to force it. There was no great flowing of bodies forward or anyone trying to win the game with the kind of pass that only Michael Bay could envision — this was a team that kept their heads, stuck to their plan and played to their strengths.

“We do not have magic ideas. It’s about working hard. You cannot be in Liverpool because of the weather, so it must be because of the football club,” said the Reds boss with a wide grin in his post-match presser. “We need luck with injuries but the squad is strong enough for us to be challengers,” he mused. “At the moment, we don’t have to be any more than that. If you shoot the ball between the posts, it’s better than when you don’t do it.”

Were truer words ever spoken? Probably, but he’s not wrong; that being said, I think it can go either way on the magic bit. Replacing optimism with Klopptimism is a feat in itself, but getting a team that looked completely and utterly devoid of confidence prior to him taking the reins to smash the likes of Chelsea, Manchester City and now Southampton on their own patches of grass is something that borders on the mystical. The Reds have never been shy about the cult of personality they build up around their managers and after levelling St. Mary’s to the ground, we’re not about to start…