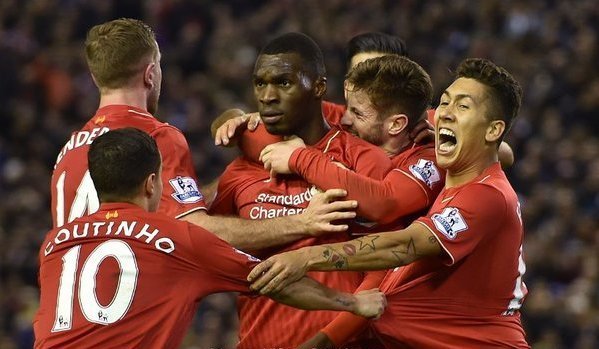 In a familiar story, Liverpool may have failed to truly take advantage of their dominance to truly trouble Leicester City ‘keeper Kasper Schmeichel, but all they needed was a moment of class as they broke a four match winless streak to hand the Premier League pacesetting Foxes their first loss since the tail-end of September.

The stats never tell the whole story, but by the time the final whistle was blown they reflected just how poor both sides were on the day. Holding 65% of the ball, the Reds continued to falter in the final third, wasting a myriad of chances and only putting a meager 7 of their 25-shots on target. Their visitors were just as woeful, mustering only 4-shots throughout, but almost all of them gave Simon Mignolet a moment of panic with Nathan Dyer coming closest with the Belgian getting down low to keep the winger from restoring parity in the closing stages.

Liverpool boss Jurgen Klopp has had a torrid time with injuries this season and he could very well be without Divock Origi for the next little while with the striker suffering a hamstring problem near the end of the first half. Although his replacement in compatriot Christian Benteke failed to truly assert himself on proceedings, the big man did well to put the hosts ahead just past the hour mark when he stretched to get on the end of cut-back from Roberto Firmino to prod the ball just out of the reach of a diving Schmeichel.

“We deserved to get the three points,” said the 25-year old following the final whistle. “The last few weeks were hard for us. We didn’t get the results we wanted but today we showed great character. We have a big squad, I have to be patient until the manager needs me. I spoke with him a few days ago and he explained what he wanted from me and I tried to do it on the pitch,” continued the embattled striker. “We have to keep going and work hard. This league this year is really strong and we have to work hard to reach our goal.”

Under increasing pressure to start justifying his price-tag, Benteke will be happy to finally find the back of the net, but in turn, Firmino — another player who has only impressed in fits and starts since his own big money move — will be just as relieved to have contributed something of real note with his assist for the Belgian’s goal exactly what the Brazilian was brought to Anfield to do.

For all the hype, Foxes duo Riyad Mahrez and Jamie Vardy had rather quiet afternoons on Merseyside with the much discussed duo ending the match on the bench with Leicester boss Claudio Ranieri keeping one eye on their home meeting with Manchester City mid-week. At this time of the year, sometimes you have to roll the dice and cut your losses. His counterpart in Klopp, who has been stymied over the past three league matches by tactical shifts and dropping heads, had an adjustment of his own for the Italian with the Reds playing an a-typical 4-4-2 and matching their visitors man for man — a game-plan that worked a treat.

“We knew today was going to be tough. We knew they would react after defeat last week and credit to them, said Foxes Defender Danny Simpson after the match. “We have to move on, we have got another big game in three days. We don’t like to lose and that hurt us but I think we will turn it into a positive,” mused the fullback. “We’ll get back in training tomorrow and get ready for Manchester City.”

Liverpool, of course, will be doing the exact same with a four match run on the road starting against a struggling Sunderland side at the Stadium of Light this coming Wednesday before they visit West Ham United for their first match of the New Year followed by back to back cup commitments with the semi-final first leg of the League Cup against Stoke City requiring a trip the Britannia Stadium and the FA Cup Third Round meeting with Exeter City a mere three-days later at St James Park.

While our inability to produce the goods in the final third remains a sore spot with the laughable late four-on-one charge that amounted to absolutely nothing the pinnacle of ineptitude, I’d rather discuss the us keeping the league leaders off the scoresheet — the only side to do so this year. The combination of Dejan Lovren and Mamadou Sakho in the heart of the defence dovetailed well, Emre Can and the impressive Jordan Henderson looked complimentary in midfield and Philippe Coutinho and Adam Lallana caused all sorts of problems up top. It might not be smiles all around, but there’s no reason to scowl.

And with that, I wish you and yours all the best; thanks for reading.