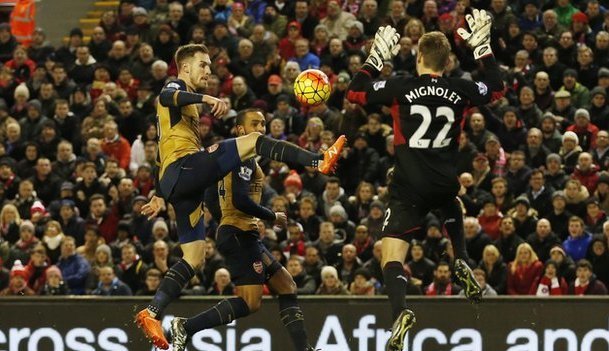 The reaction on social media to Liverpool ‘keeper Simon Mignolet’s performance in the thrilling 3-3 draw with Arsenal at Anfield yesterday may be less than complimentary, but with his number one shot-stopper once again looking shaky and maligned, Reds boss Jurgen Klopp was quick to thrown his support behind the Belgian.

“For the second goal he needs help from all the players,” said the German manager, playing down Mignolet’s role in being beaten at the near post by Gunners striker Olivier Giroud as the visitors claimed what looked to be a rather soft equalizer. “On the second goal, on a perfect day he can make a save but there were a lot of mistakes before,” explained Klopp, before adding the obvious, “We have to defend this better.”

While there’s no question that the Reds as a whole need to be better at the back, Mignolet, who looks set to put pen to paper on a new five year deal worth in excess of £50,000 per week by the end of the month, has failed as of late to be a competent last line of defence. The 27-year old may have claimed the most clean sheets of any Premier League ‘keeper through 2015, but his confidence looks shaken and that doesn’t bode well for his chances of repeating that rather impressive feat.

Klopp has constantly played down speculation that he’ll look to bring in a replacement for the Belgian shot-stopper, but after his understudy in Adam Bogdan had a horrible outing against League Two side Exeter City in the League Cup last Friday, the Reds have recalled youngster Danny Ward early from his loan spell with Scottish outfit Aberdeen with the German manager saying that it was an “easy decision” to make and a “good idea” to bring the Welshman back to Anfield.