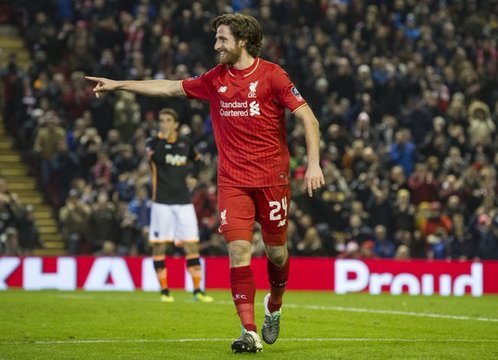 Although his long term future may not be at Liverpool, the Reds have rejected an approach from Swansea City for former midfielder Joe Allen as the Welsh side look to drag themselves out of the relegation scrap and back up into the right half of the table.

The 25-year old, who followed ex-Liverpool boss Brendan Rodgers from the Liberty Stadium to Anfield, opened the scoring as the Reds advanced to the fourth round of the FA Cup with a 3-0 win over League Two side Exeter City yesterday, but the Welshman has spent much of the season on the fringes of the team. Not much is known about the offer from the Jacks, but Jurgen Klopp looks set to spurn any further approaches for his services. Allen, on the other hand, has hinted that he could be on the move in the near future.

“That is something which has gone very quiet,” said the 23-year old about talks to extend his contract with the Anfield outfit. “I am not too sure really. I have made only one league start this season and I want to play more, I think that is obvious for any player in that situation,” he continued. “From my point of view it is about knuckling down, doing my job and giving my best, which I always do.”

That, of course, might not be enough to keep him on Merseyside long term. There is already a lot of competition for spots in the Liverpool first team and with talented youngster Marko Grujic set to arrive from Serbian side Red Star Belgrade at the end of the season, there may not be room for the man that Rodgers dubbed the “Welsh Xavi”.