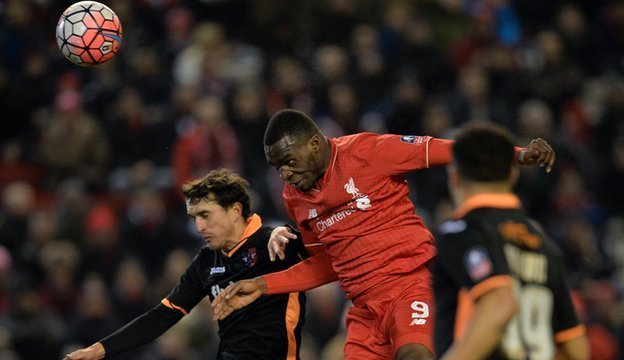 It was another frustrating night for Liverpool striker Christian Benteke with the Belgian coming up on the wrong end of a number of opportunities to get on the score-sheet as the Reds ran out 3-0 winners over Exeter City to advance to the fourth round of the FA Cup.

Joe Allen, Sheyi Ojo and Joao Carlos Teixeira were all on the money as the Anfield outfit navigated the replay with the League Two side with relative ease, but the 25-year old couldn’t help turn the meeting into a rout — even going so far as to miss a one-on-one with Grecians ‘keeper Bobby Olejnik late on. Despite all that, Liverpool boss Jurgen Klopp remains firmly behind the misfiring hit-man.

“I saw him after the game, he was in good shape,” the German manager told BT Sport after the game. “There were a lot of situations at the beginning of the game where the referee said Christian made a foul — it was not easy for him, but he got 92 minutes and that was important for me,” explained Klopp, possibly hinting that he won’t be in the starting eleven for the meeting with Norwich City this weekend. “It would have been good for him and us had he scored tonight, but he worked the spaces around the box well. Whenever a striker doesn’t score he’s not satisfied. That’s normal.”

That’s something that Reds fans are having to get used to with Benteke often putting in ineffectual performances in the high intensity, high pressing system employed by the former Borussia Dortmund manager. While Klopp has come to the defence of the big Belgian on more than one occasion, his long term future at Anfield will remain in question if his performances don’t start to warrant his price tag soon.