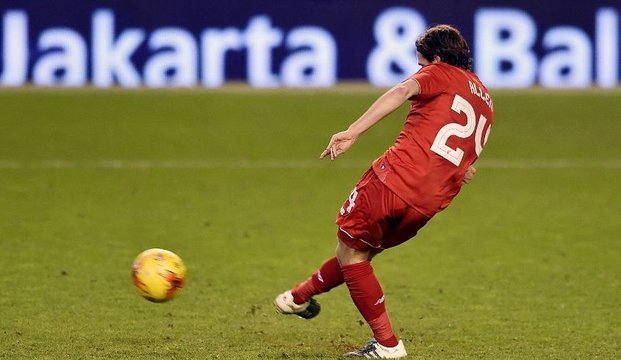 After seeing Liverpool ‘keeper Simon Mignolet deny Stoke City defender Marc Muniesa as the League Cup semi-final between the two clubs inched along in sudden death penalties, the burden of sealing the deal fell to Reds midfielder Joe Allen — a duty he handled with the kind of cool head you’d expect from a player far more his senior.

“It means so much. It’s an incredible feeling. We made it difficult for ourselves but, in some ways, that makes it more exciting,” he told the club’s official website. “The atmosphere after the penalty went in was incredible and now everyone can’t wait for Wembley,” enthused the match winner. “I’d be lying if I said I wasn’t a little bit nervous but I picked my spot and thankfully it hit the back of the net. Anfield went off and that’s what football’s all about – [it’s a] great feeling.”

With crosstown rivals Everton’s dreams of an all Merseyside final dashed after the Toffee’s went out under controversial circumstances to Manchester City at Goodison Park yesterday, the trip to Wembley may not have a distinctly local flavour, but there’ll be no love lost between the two sides from the Northwest of England when they converge on the Capital at the end of the month.

“That seems to be the way we do things now. It’s probably not good for the stress levels but it’s certainly exciting,” laughed Allen when asked about the pressure that comes along with penalties. “I think the great thing is, we’re yet to find that consistent form but in some ways we’re excited because we think it’s just on the horizon. If we can build that momentum then we can really kick on. “You have to have that self-belief that things will come good. I think consistency will be the key for us,” he explained. “We’ve pulled off some great results and had some great performances along the way but I think it’s just about doing it as often as we can and we know then we’re a threat to anyone.”