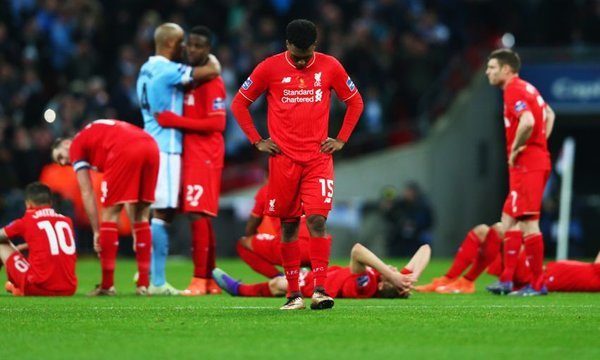 It’s not too often that Liverpool come out on the wrong end of a penalty shoot-out with more than our fair share won in our time, but that does little to soften blow as Manchester City got the better of the Reds from the spot after the two sides refused to be split in extra-time.

Citizens midfielder Fernandinho got things well and truly underway following a goalless opening 45-minutes when a routine shot-cum-cross slipped under the grasp of Simon Mignolet to send the blue half of Wembley into a frenzy. Jurgen Klopp’s side, up to that point, had failed to trouble the opposition all too much, but with the pressure ratcheted up, they got their just rewards when Philippe Coutinho struck the equalizer 7-minutes from the end after a well timed piece of pressing ended with Adam Lallana striking the post only to have the ball fall kindly for the 23-year old to sweep past a stranded Willy Caballero.

The Argentine, who was somewhat of a surprise choice after being partly culpable for the 5-1 loss to Chelsea only a week ago, got the last laugh though with penalty saves from both Lucas and Coutinho coupled with Lallana’s miss sealing the win and justifying the faith Manuel Pellegrini showed in the beleaguered ‘keeper.

“I am disappointed of course with the end. Pleased with a lot of things I saw in the game,” explained Klopp following the final whistle. “We tried everything, we scored the goal. We had a big chance with another few situations. It is unlucky but it is one way to lose a cup final,” said the German, resigned to the result. “Manchester City should not have scored their goal, we had to strike back and we did. We played well in a lot of moments. It doesn’t matter what I say now, it won’t change the result,” conceded the Liverpool manager with disappointment written all over his face. “We all have to feel it now. It is was it is. You can fall but it is how you stand up. We cannot change this game now, we have to carry on and we will carry on.”

After losing a cup final, you can roll out all the real good cliches — all those famous ones about the lottery of the shoot-out, how you now have more questions than answers, magical flying form books and the like, but let’s swerve that completely and just say you can sum up our day in Mignolet’s performance. The Belgian ‘keeper remains an enigma; a worldie to deny Sergio Aguero in the first half is followed up by the aforementioned clanger and just when you think the 26-year old is too rattled to be effective, his reflexes foil Fernando from six-yards and he’s on point to keep Yaya Toure from claiming a certain tap in only to come agonizingly short on getting on the end of a single penalty despite guessing right on a number of occasions.

Penalties are penalties and at the end of the day, we hardly did enough in normal time to justify anything more than what we ended up with. That Coutinho’s late leveler was our first shot on target is telling in itself and one can only wonder if the Reds problems in the final third comes down to a combination of rust on the part of Daniel Sturridge, a lack of familiarity between him and the Brazilian duo and City becoming an entirely different side with Vincent Kompany marshaling proceedings.

If you’re going to catch feelings for anyone though, it would have to be for Klopp with the German now losing four cup finals in four years between Borussia Dortmund and now with Liverpool. While it’s all a bit gloomy at the moment, it’s pretty obvious that this won’t be his last chance to break that trend…